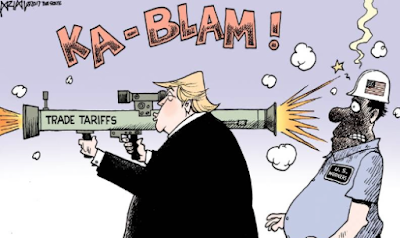 Twitterman announced tariffs on steel and aluminum imports from our closest neighbors and allies -- Mexico, Canada, and the European Union -- and they promptly threatened back, saying they'll impose tariffs of their own on North Carolina pork and tobacco. Andy Curliss, CEO of the North Carolina Pork Council, pointed out -- if anyone's listening -- that 25% of NC pork gets exported, and Mexico and Canada account for half of those exports.

Larry Wooten, president of the North Carolina Farm Bureau, chimed in: "Those countries are important customers for us. If [threatened foreign tariffs] come to pass and if it really happens, it could be devastating for the North Carolina pork industry."

Same for tobacco: "The European Union produced a 10-page list of products it would retaliate against, if the U.S. imposes the tariffs. Among the products: tobacco in all forms — cigars, cigarettes, chewing tobacco, water-pipe tobacco and smoking tobacco. The state grows about 50 percent of the nation's tobacco and exports about 75 percent of what it grows, Wooten said."

Posted by J.W. Williamson at 6/01/2018 11:08:00 AM
Email ThisBlogThis!Share to TwitterShare to FacebookShare to Pinterest
Labels: Donald Trump, North Carolina