The Democratic Primary Candidates in CD # 2

In North Carolina's Congressional District 2, incumbent Republican George Holding already has at least one Republican primary opponent, Allen Chesser. Don't know a thing about Chesser. But I'm learning things about the Democrats lining up on the other side for a primary to see who gets to beat Holding.

George Holding was originally elected to Congress in 2012, but in the 13th CD. When the districts got redrawn under court order, a large chunk of District 13 was redrawn into District 2, and Holding decided in 2016 to run in the latter, which required a primary against incumbent Republican Renee Ellmers. Holding whupped her and then easily beat the Democrat that November.

According to Thomas Mills, "The 2nd District is one of the most independent in the state. More than 30% of the people are registered unaffiliated while Democrats and Republicans are split evenly, making up 35% each .... [It's] a moderately conservative district made up mainly of the suburbs of Raleigh. Legislators who drew the district cut out most of Raleigh, but, still, half of the voters live in Wake County."

Also according to Mills, both the DCCC (Democratic Congressional Campaign Committee) and Swing Left ("a group of individuals from diverse industries, including tech, media, finance, nonprofits, and art [who] have no formal affiliation with any party, union, or organization .... We've been sitting on the sidelines for too long. We don't have all the answers, but we know it's time to channel our anger and despair in a positive direction") have rated District 2 as a potential Democratic pickup.

Ken Romley -- I'm on his email list, so I see him in action pretty regularly. Thomas Mills (quoted above, and the political guru I'm inclined to pay attention to) is also for hire as a Democratic consultant, and Romley has hired him (which speaks well for Romley, IMO). No surprise, Mills wrote a strong endorsement of Romley on his blog this morning (politicsnc.com). I'm indebted to his perspective. 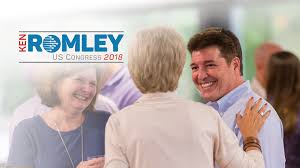 According to Mills, Romley has raised 12 times as much campaign money as he closest Democratic rival (see below). That makes him someone to watch. And get this: He was registered Unaffiliated until the election of 2018, found that he could no longer refuse to take a side, and registered Democrat to challenge Holding. That is the pure essence of what's been happening all over the country -- "the Trump effect," the energizing of new political talent who know something's got to be done to resist what's happening in Washington.

Mills again: "He understands how to reach the unaffiliated voters who have lost faith in both parties because he was one. He’s not bogged down by the baggage of party politics that can turn off independent voters and he brings a fresh perspective to both the race and politics in general."

His claim to smarts is his success in business: He's a high-tech entrepreneur who has started four different successful businesses over the last 25 years. According to his website, his most recent start-up, Zift Solutions, now employs nearly 200 people. (He's certainly got the best campaign website I've seen in days.) He's not shy about making Trump (and Trumpism) a centerpiece of his criticism of the current state of affairs, but he has stated progressive stances on a wide number of issues. 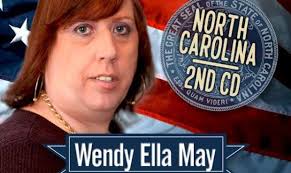 Wendy Ella May -- Self-described as the first transgender candidate to run for Congress from North Carolina, she also describes herself as a "New Deal Progressive Democrat" and was a DNC delegate from North Carolina for Bernie Sanders in 2016. She also signed up in 2016 to run for the county commission in Johnston County, getting about a third of the vote.

She's a disabled American veteran and says, “One of the reasons I’m running is because of the way the Veterans Administration treats veterans.” She has also worked as a firefighter, minister, and journalist. She’s currently president of the LGBT Democrats of Johnston County and second vice chair of the Progressive Caucus of the N.C. Democratic Party.

Linda Coleman -- She may be considered the front-runner in this primary, because of her indisputable name recognition, but I'm not sure that's enough to win it. She made a strong showing in
the lieutenant governor's race in 2012, after winning several prior elections as a Wake County commissioner and a member of the NC House. She's well known. But after losing to Dan Forest in 2012, she lost again in 2016 without improving her margins with the electorate. She's beginning to get that "perennial candidate" look.

In the 2012 elections, Coleman ran a Democratic primary against Eric Mansfield. Pam's Picks endorsed Mansfield in that race and I voted for him, but Coleman beat him by a dozen points. Pam's Picks evaluated Coleman as a lackluster candidate who seemed to float on name recognition.

I don't think there's a big difference between Coleman and Romley as to basic, bed-rock issues, so it does come down to electability. I'm inclined to agree with Thomas Mills that Romley is the more electable, as the new thing, as the more energetic candidate, as the guy wading into deep water to save the drowning at floodtide, as the go-getter with no sense of entitlement.

I appreciate the support, and agree with your perspective. This is a time when our nation's current direction is going to hurt a lot of people. When things get dangerous for our communities, lots of good people feel compelled to wade in and do their best to help. I like to think of myself in that category. More of what I'm doing day-to-day is on my website: www.kenromley.com.