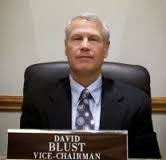 John Blust, Republican member of the NC House (District 57), has just announced that he will not be running for reelection this year. That suddenly opens the door a little wider for Democratic challenger Ashton Clemmons (who was written about here on February 1).

That retirement seems like a pretty big deal and it comes rather late, on the opening day of filing, which means Republicans in Guilford County may be scrambling about now.

While John Blust retires, his brother David Blust intends to take another shot at Watauga County commission. He'll be running against Democrat Larry Turnbow, who beat him in 2016.