District 41 is in suburban north Mecklenburg County and is considered the "swingy-est" of the four Senate seats covered by this post.

Incumbent Republican: Jeff Tarte won by a 21 percent margin in his last non-presidential election. He graduated from the University of Illinois with a bachelor's degree in econ and has worked as a top-level exec for a number of multimillion-dollar companies. He has served as the mayor of Cornelius. (Civic office in Cornelius has been a repeat springboard for many prominent Republicans.) Tarte first ran for the senate in 2012, narrowly winning the Republican primary but running unopposed that November. He did have Democratic opponents in 2014 and 2016. In the latter, Tarte's winning percentage (54.48%) looked a little soft compared to 2014. On some topics, Tarte has at least sounded moderate. On the disruption to the state erupting out of HB2 (the bathroom bill), he told the Charlotte Observer: "Transgenders in bathrooms were not a problem." He opposed the transfer of tax
revenues from urban to rural counties, but he is also a cheerleader for shifting the tax burden increasingly onto "consumers." He openly opposed his Republican Gov. McCrory over the I-77 toll lanes.

Democrat Natasha Marcus made an unsuccessful bid for the state House in the Cornelius neighborhood in 2014, when Republican John Bradford III defeated her 55 to 45 percent. “The policies that touch our lives most closely often come from the state level,” Marcus told WUNC. “Federal politics is important, but what happens at the General Assembly in Raleigh – from public school funding, to healthcare, to whether we’re going to have to pay tolls here in the North Mecklenburg area is also important." According to Ballotpedia, Marcus earned her B.A. in public policy from Hamilton College and her J.D. from Duke University School of Law in 1994. Her professional experience includes working as a lawyer for Brooks, Pierce, McLendon, Humphrey & Leonard; as Judicial Clerk for the Honorable Frank W. Bullock, Jr. of the U.S. District Court in Greensboro; and as a founding member of DavidsonLearns, a non-profit providing senior citizen learning and enrichment. Marcus intends a fight for the seat: “Cuts to public pre-K through higher education, unconstitutional laws, politicians who put polluters over our clean air and water, policies that make healthcare more expensive and less accessible, and expensive toll lanes on I-77 have taken us backwards. Like many people in our community, I am fed up with being ignored by Raleigh Republicans and am ready to take a stand.”

Incumbent Republican: Bill Rabon is considered Senate leader Phil Berger’s right-hand man. Rabon first entered the chamber in the Tea Party wave of 2010 and by the 2016 General Election, he was unopposed by any Democrat. He succeeded the retiring Rules Committee dictator Tom Apodaca as the master controller of legislation entering and exiting the senate. He is a Southport veterinarian and a partner in several animal hospitals. He is said to have been mentored by former Senator Bob Rucho, so there's an air of conservative toxicity about Rabon, though some of that may be emanating from capo dei capi Phil Berger. Rabon reportedly cussed Governor McCrory's wife Ann and her goddamn "puppy mill" ban bill in 2014, saying over his dead body would it ever pass the senate. (Remember, he's the owner of animal hospitals.) He publicly criticized Ann McCrory for lobbying the General Assembly for the bill, saying at the time that she was breaking "all kinds of laws." But Rabon himself is not above steering taxpayer money to powerful business interests, particularly those that also 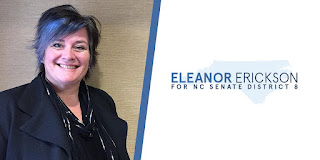 funnel campaign cash his way. Rabon filed the bill that would limit all judges, from the district level on up, to two-year terms in office. That jolly piece of horseshit would turn every judgeship into a partisan circus, with judges having to raise money and run every two years.

Democrat Eleanor Erickson Erickson is a long-time resident of Brunswick who works as the general manager of a local hotel. She is so new at this "candidate thing" that she doesn't yet have web
infrastructure, but it's clear that she's planning to make the pollution of the Cape Fear River an issue along with the deterioration of support for public education in the Republican dominated General Assembly. (Republicans say they love education and have lavished billions at least on the public schools, but their love looks a lot more like involuntary suffocation.) Erickson has some local renown in Brunswick County as "a pillar of the community who took initiative and built a new playground at a local park instead of waiting around for others." She is co-founder of the nonprofit group Where We Live, which raised the money for the playground and which has branched out into organizing music and arts events around Bolivia, NC, and Southport, along with regular weekly activities for working families. Through Where We Live, social media, and the Rotary Club, Erickson has become a leader among younger professionals in the county.

District 2 = Carteret, Craven, and Pamlico counties on the coast.

Republican incumbent: Norm Sanderson is a three-term senator, first elected in 2012. In 2014 and 2016, Sanderson won with about 60 percent of the vote. According to Ballotpedia, Sanderson received a B.A. in Christian education from Logos University in 2002. Logos is an on-line, Bible-based, "interdenominational" education-dispensary based in Jacksonville, Florida. Sanderson's professional experience includes working as a sheriff's deputy and a real estate business owner. He currently owns Kids Heaven School Age Care Center. In 2017, Sanderson proposed a poisonous anti- immigrant sanctuary city law to punish the state's cities if they won't participate in rounding up brown people. Sanderson is a conservative true believer in Phil Bergerism. He has said that North Carolina is a much better place now and ever since Republican took over in Raleigh in 2011.

Democrat Ginger Garner is a doctor of physical therapy and a longtime orthopaedic clinician serving the healthcare needs of new mothers and the military (Cherry Point is in her district). She says she was born in Asheboro "to teenage parents," hardworking Republicans who instilled in her the values of hard work and thriftiness which she brings with her into running for office as a Democrat. She received her Doctor of Physical Therapy and Master of Physical Therapy degrees from The University of North Carolina at Chapel Hill and her undergraduate degree at the University of North Carolina at Wilmington. She is the founder of the Professional Yoga Therapy Institute (2000), the first interdisciplinary, medical yoga program in the world. Also established the first doctoral level medical yoga curricula, now adopted by medical schools throughout the US and Canada. She says on her website, "My story speaks for itself: for 20 years I have served our coastal community as a physical therapist, as an aid and Christian mission worker, as a volunteer, as a CEO and small business owner, and as a wife and mother of three." She mentions the opioid epidemic as a major concern of hers along with protection of the North Carolina coast from offshore drilling.

District 25 takes in a swath of Moore, Richmond, Anson, and Scotland counties and two dozen little towns including Hamlet and Laurinberg.

Republican incumbent: Tom McInnis was first elected to the senate in 2014 by the skin of his teeth (50.4%). In 2016 he did considerably better against Democrat Dannie Montgomery, taking almost 64% of the vote. He makes his living as an auctioneer (Iron Horse Auction Company), real estate broker, and used automobile dealer. He previously served eight years on the Richmond County Board of Education. A standard-issue conservative.
Democrat Helen Probst Mills is an attorney from Pinehurst and enters the race, she says, in part to simply provide an option.“The reality is that I walk in on Election Day to the polling booth here in Pinehurst and there are no Democrats for me to check. We need a choice,” Mills said. “There needs to be an opportunity for an individual to stand up and to make him crystalize his position on issues and policies and to defend the votes he has taken.” Mills says she grew up a daughter to a single mother and is herself the mother of three and a cancer survivor who moved to North Carolina with her husband, Stuart, in 2006. She is licensed to practice law in Illinois. Last year, Mills was appointed by Gov. Roy Cooper to the Sandhills Community College Board of Trustees. She also serves on the college’s Foundation Board, where she helped develop a program allowing high school graduates to attend for two years without having to pay tuition. She serves as development chair for the Northern Moore Family Resource Center in Robbins, which has opened a preschool and is developing a community center. She credits the overcoming of breast cancer to having health insurance:  “Everyone, no matter their background or how much money they make, should have access to affordable, quality health care. Yet too many politicians in Raleigh put petty partisan politics over policies that would help thousands. That is wrong for my community and for North Carolina.” (Republican incumbent McInnis has opposed, like most other Republicans in Phil Berger's senate, the expansion of Medicaid under the Affordable Care Act because he's afraid of catching Obama cooties.)