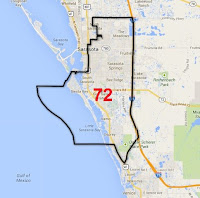 A special election for a Florida state House of Reps yesterday -- in a district with 13,000 more registered Republicans than Democrats -- went to the Democrat. No Democrat has won District 72 since at least 2010 (that's as far back as I looked). The last Republican incumbent won the district in 2016 by 17 points, and Trump beat Hillary here by more than 4 points.

The worm turns. Yesterday, Democrat Margaret Good took District 72 by a healthy 7 points. That's an almost dozen-point swing away from Trump, after only one full year of Colonel Bonespurs.

Margaret Good is a lawyer and first-time candidate. According to Ryan Butler, "Good's edge came from widespread support throughout the district, carrying all but four voting precincts .... Running a campaign prioritizing environmental protections, Good touted plans to combat climate change and
better prepare the region in case of another storm such as Hurricane Irma. She also stressed commitments to funding public schools, health care and workforce development."

Good went to the University of Florida Levin College of Law, where she served as an editor of the Florida Law Review and graduated with honors. And now she's a member of a (growing) minority in a Florida legislature very much dominated by Republicans.

Republican candidate James Buchanan (not making up that name) -- he's the son of Congressman Vern Buchanan, and he's in real estate too -- so ... connected to Republican money. During the campaign he played up his subservience to Trumpism, holding a rally where former Trump campaign manager Corey Lewandowski carried the torch for him, and, according to Dave Weigel, Buchanan encouraged his supporters when they started chanting "lock her up" at that rally.

But look at his website. Buchanan's vanilla, country-club Republican with a questionable core.

Posted by J.W. Williamson at 2/14/2018 10:06:00 AM
Email ThisBlogThis!Share to TwitterShare to FacebookShare to Pinterest
Labels: 2018 Blue Wave, Donald Trump