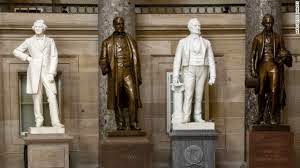 Every state of the Union gets two statues in the famous Statuary Hall in the U.S. Capitol. North Carolina's two honorees are currently former governors Zebulon Vance and Charles B. Aycock.

Zeb Vance was a big slave-owner and a Confederate military officer. Aycock was a big proponent of public education and a major segregationist. At the moment, Aycock's reputation is under a cloud, though why Aycock is now singled out -- and Zeb Vance isn't -- for having his statue thrown out of Statuary Hall is an interesting case of political opportunity and egregious ass-kissing.

And who's puckered up to kiss major ass? Senator Dan Soucek.

'Cause Senator Dan wants a statue of Rev. Billy Graham to replace former Gov. Charles B. Aycock in Statuary Hall in DeeCee. No kidding. Soucek told John Newsom that his "ah-ha!" moment came while visiting Statuary Hall with a constituent who told Soucek about Aycock's white supremacist past.

Thus, behold! Soucek is the primary sponsor of S529, A BILL TO BE ENTITLED AN ACT REQUESTING THE JOINT COMMITTEE ON THE LIBRARY OF CONGRESS TO APPROVE THE REPLACEMENT OF THE STATUE OF CHARLES BRANTLEY AYCOCK IN NATIONAL STATUARY HALL WITH A STATUE OF THE REVEREND WILLIAM FRANKLIN "BILLY" GRAHAM, JR.

From which naked toadying we turn away in embarrassment, leaving the historical, architectural, and cultural heap of Soucek's wreckage for others to unpack at their leisure.

Great. Billy Graham may not have owned slaves, but he is every bit as bigoted as the slave-owners. Not to mention what a suck up to evil (like Nixon) he has been. Not to mention his charlatan fund-raising. I guess Soucek knows who he owes his position to though and we all know who he serves. It sure isn't us.

A more appropriate choice would be Andy Griffith - in many respects, Griffith's impact on NC culture is very similar to that of Will Rogers, who is Oklahoma's entry to the collection.

Considering Griffith's liberal leanings, I can't see anyone in the Tea Bagger legislature getting behind that plan.