This Week in "Eff You!" Government 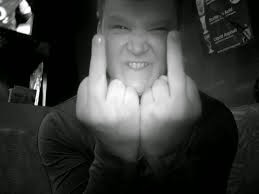 Yes, the honorables convened in Raleigh right now are still pursuing what we've come to think of as "eff you" government ... "eff you!" teachers and schools! "Eff you!" cities and towns! "Eff you!" you mother-effing environmentalists!

It's hard to keep up:

1. The last small protection for homeowners -- protest petitions in zoning cases -- is about to be eliminated from North Carolina law, where it's provided a tiny last-ditch shield for some neighborhoods encroached on by high-dollar, big-muscle bullies. "Eff you! neighborhoods."

2. On Monday Governor Squishy signed a law repealing a statutory requirement for air pollution rules for fracking operations, opening the door for the immediate issuance of licenses to gas exploration in the state. "Eff you! water-drinkers."

3. Also on Monday, after a three-judge panel ruled in favor of McCrory in his separation-of-powers lawsuit against the legislature, that same legislature (well, its Republican overlords) decided in retaliation that it will confirm no executive branch appointments until it gets its way. "Eff you! Governor Squishy." (It's unusual that I'm taking up for our sadly befuddled chief executive, but these are unusual times.)

4. The scheme to steal Wake County commissioner elections back for Republicans is now in the NC House, after the NC Senate passed it in record time. "Eff you! Wake County voters."

5. Sen. Bill Rabon introduced a "local bill" to eliminate the office of Coroner in Brunswick County, an elected official who has somehow offended Sen. Rabon. “My position is a county position, elected by the people of Brunswick County,” Coroner Greg White said. “What I have learned is that Mr. Rabon did not have any conversation with county officials, the county manager or the county attorney. County officials had no say, had no input into this matter, which I think is disrespectful to them.” "Eff you! Brunswick County voters."

Eff you voters, here's 64 pp. of new rules and regulations, and Eff you fair apportionment of electoral districts and polling stations, we are in charge now and don't count on ever hearing the Eff=fairness word from us.