Matt Snyder, past chair of the Watauga GOP, who was pictured in the High Country Press (photo by Lonnie Webster) in March 2014, pushing his partisan opinion that there should be no early voting on the ASU campus.

Did I mention "past chair of the Watauga GOP"?

So the director of the local Board of Elections to replace the fair and impartial Jane Ann Hodges will be a highly partisan political operative who likes getting in people's faces. Why are we not surprised?

Snyder's name was announced by Luke Eggers at the Watauga Board of Elections special meeting this evening. Luke allowed as how he "had been thinking" about a replacement for Director Hodges, and he listed a number of qualifications he had thought about:

That was it -- Luke Eggers' job description for the new Director of Elections. Experience? No. Non-partisanship? Absolutely not.

Bill Aceto had no recommendation, making it perfectly clear that he and Eggers had already decided on their guy. As it turned out, Democratic member of the BOE, Kathleen Campbell, came armed with some nine other applications, one of those Republican activist Deborah Greene, whom I would absolutely trust with Watauga County elections. I would. She's incorruptible.

Campbell argued with Eggers and Aceto that there should be a job listing and at least a state-wide search for an experienced elections professional. Eggers and Aceto were having none of that. No, they've had their partisan tool in mind now for weeks.

Other speakers urged the board to be professional. "Don't make this a partisan appointment," said one speaker. 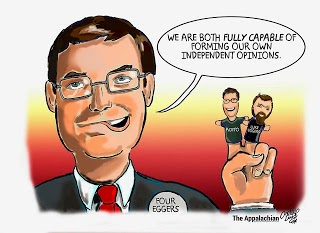 The presence of Luke Eggers' older brother and ghost writer Stacy C. Eggers IV ("Four") also drew comment. He has never before, since the advent of Eggers & Aceto, attended a board meeting, and suddenly he was there in his official capacity as county attorney. It was a bit embarrassing, since Four was very publicly outed as his little brother's puppet-master, and it seemed this evening that Luke felt he needed some legal backup.

They didn't vote to install Snyder. They couldn't, because their published agenda for this special meeting did not include an item for action. They'll appoint him at April's meeting, ignoring any other applications and refusing to do a search or even publish a job description.

Someone in the audience at today's meeting said (a great understatement), "They don't even try to cover up what they're doing."

They've got the power. They intend to politicize the Watauga County Board of Elections in ways none of us could have predicted even last year. Who will trust an election outcome in this county in 2016?

Kathleen Campbell has been nothing more than a trouble maker. I highly suggest the Democrat party look at replacing her.

I was hoping to at least be CONSIDERED for the post, after submitting my resume....and at least I want every eligible voter to be able to vote....but another dream. Crushed.

It is inconceivable that the former chair of the local GOP could in any way act in a nonpartisan way. How outrageous to replace Jane Anne Hodges with someone so completely bound to one party.

I am surprised at how openly they spread sleaze without even apologizing!

Kathleen is indeed a trouble maker. For the Republicans who are trying in every way possible to suppress the votes of people they don't agree with. No doubt the Republicans would advise the Democratic Party to replace her! I say Good on her.

I'm a Republican and I love Kathleen! She continues to turn off the moderate voters in Watauga with her disruptive and amateurish grandstanding. She has no credibility with the state BOE and makes the local democrat nucleus of nuts look like fools.

Why would we want her replaced?

If the Dems were in power I wonder what the GOP would think of Pam Williamson being the Board of Elections director! Same thing...how's that feel?

Let's stop this childish behavior and do right by the people. Elected officials work for US, so let's get back to it!

Eggers, Aceto, Four and now Snyder should all be ashamed as should their puppeteers!

Not sure the state BOE is a group whose approval anyone would wish. And facts and figures and accurate maps are not "amateurish grandstanding".

News Flash...members of the county Board of Elections are not "elected officials".

Snyder should be ashamed? For what? For having his name submitted for consideration?

The fact that 3 of the biggest Republican Haters in the county spoke against him at the BOE meeting should be considered an endorsement!

Greene has a lengthy record of attacking local Republicans at every opportunity! Ayers used his taxpayer paid position at ASU to lecture students about "Republican Bastards"...and Pam W? What needs to be said?

Maybe Dems just need to get used to the fact that they are no longer in control of the state of NC nor of the county Board of ELections!

What are yall on my ass? I didn't apply for the position. I chose not to because I am highly partisan and have no business serving in a non-partisan way as Director of the Board of Elections. Same goes for Mr. Snyder I might add.