Austerity in NC, Unless You Work for a Republican Big-Wig 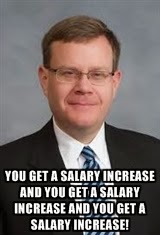 A spokeswoman for Moore said the higher salaries are justified because they reflect “expanded roles in the office.” Why, one senior advisor in now also in charge of pulling dead leaves off the potted plants!

Rob Schofield of the advocacy group N.C. Policy Watch said, “The thing that’s most striking is the disconnect between all of the rhetoric about shrinking government and at the same time adding more staff and pumping up salaries.”