Don't Look to Senator Tillis If You Want 'Net Neutrality' 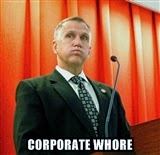 Senator Dung-Hands Von Fecal-Fingers led the NC House in 2011 when the General Assembly passed a law saying that a North Carolina city could not offer broadband to its citizens below cost. He did that because he loves freedom so much.

He especially loves freedom for AT&T, Time Warner Cable, and Verizon, and they have returned the compliment with $$$.

The city of Wilson, NC, appealed to the Federal Communications Commission (FCC) to lift the restriction, which the FCC did yesterday.

The Senator promptly had a hissy fit ... because, you know, he loves freedom too too too much. He promised to introduce a bill in the U.S. Congress to prohibit the FCC from overriding state freedom laws broadband restrictions.

Posted by J.W. Williamson at 2/27/2015 10:59:00 AM
Email ThisBlogThis!Share to TwitterShare to FacebookShare to Pinterest
Labels: net neutrality, Thom Tillis