Look What the General Assembly Did To Lee County 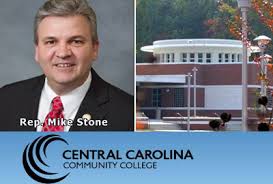 We hear about the new Republican majority in the General Assembly and what they did to Asheville's water system, and we hear about how they're trying to strip Charlotte of its airport, and we know about how they're forcing Durham to deliver water and sewer services against the will of the people to a huge mega-development outside city limits.

But some of their "smaller-scale" meddling in local government doesn't get the same news coverage.

Take Lee County and its local school board. See, Lee County has a majority-Democrat school board, and that fact apparently puts a burr under the saddle of the local Republican member of the NC House, Rep. Mike Stone, who was just elected in the Tea Party surge of 2010 and who has been drunk with power ever since.

Rep. Stone introduced three local bills in the General Assembly, all clearly intended to punish the Lee County School Board:

1. H490 forces the school board  — which has been officially non-partisan since it was established in 1967 — to hold partisan elections.

2. H491 transfers control of school resource officers from the school district to the Lee County Sheriff's Office. The sheriff is a Republican.

3. H512 takes away the school board's power to appoint members of Central Carolina Community College's Board of Trustees.

So much for local government.

But wait! A Lee Co. Superior Court judge has just granted a restraining order against H512 while a new lawsuit plays itself out.

The passage of local bill H512 ended the terms of four members of the Central Carolina Community College, specifically the four who were appointed by the Lee County School Board, and it furthermore decreed that none of those four people can ever be reappointed. Those four, one of whom was only sworn in a couple of weeks ago, have sued, alleging that H512 serves no legitimate government interest and is arbitrary and capricious.

"Arbitrary and capricious"? Why, yes, and perhaps there's still a judge in North Carolina who can recognize the truth of that. While H512 was singling out four people appointed by a Democrat-majority school board, it was leaving alone four other trustees appointed by the Republican dominated Lee County Commission. That's about as arbitrary as you can get. Also blatantly partisan, turning education, or at least the possibility of education, into a political pissing match.

Mike is stoned. What a waste of protoplasm he is.

Why is the town still spending taxpayer money for more water? Raleigh will just steal it to fuel development for friends of the GOP. More student complexes just over the horizon - literally!

Why is the town stealing water from another county than the one it is in?