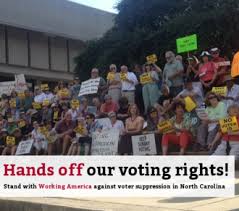 Gerry Cohen's piece in today's News & Observer is important for all college students registered to vote in Watauga County who may be nervous about Republican schemes to block their votes. It might also be sobering for Anne Marie Yates and others in the Watauga GOP who are planning to challenge the registrations of dorm-dwelling ASU students.

The rights of students living in dorms to vote where they're living was established unanimously by the N.C. Supreme Court in 1979 in Lloyd v. Babb, the same year that the U.S. Supremes found the same thing in Symm v. U.S.

The fact that North Carolina Republicans, particularly those living in counties with major universities, or even small colleges, are now prepared to replow these old rows tells us a great deal about the over-arching problems in the GOP: tone-deafness, ignorance of history, being stuck in a very deep rut that is backward-looking rather than forward-moving.

It's a losing platform. And they are losers.

Thanks for reposting my article. By the way, Andy Ball's grandfather hired me to work at the General Assembly in 1977, and the first local political campaign I ever worked in was Steve Metcalf for Watauga County Commissioner in the 1972 Democratic Primary. Steve was an AppState senior and I spent three days and knocked on hundreds of doors, leaflets in hand. - Gerry Cohen

JerryWayne-Most of the freshman and some 2nd year students chose or are required to live on campus. After they are "seasoned", most or all chose to live in apartments off campus. They can certainly vote in the local town election if they can prove a campus address. When they move off campus, few will update their information with the BOE. That is one reason there are so many now in the records that show 9300 people in Boone 1,2,3. There is no way that 9300 people will show up at the Ag. Center to vote. They may have to walk a little but AppState students are use to walking. I see that the dorm at Appalachian Heights is closer to the Ag.Center than the Plemmons Union. Also, the regular folks who live near Horn in the West area can now go to the Ag.Center where they have free parking in front. Previously, they were relutant to vote at the Student Union because no parking at all for the public. Now they will not be disenfranchised. Poor students- having to walk 2950' to vote. Have you ever!

Just exactly which party holds the governor's office and both houses in the legislation? That would make the other party the losers.