The "Christian" Example of Franklin Graham 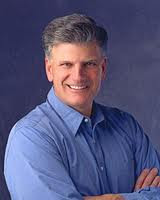 Apparently seeing that other Republican politicians have the lady parts of our society under surveillance, Boone's hometown boy Franklin Graham decides on "Morning Joe" to reopen some old wounds, maintaining that Barack Obama began attending Church to bolster his political career and is a Muslim under Islamic law. “Islam sees him as a son of Islam because his father was a Muslim, his grandfather was a Muslim, great grandfather was a Muslim and so under Islamic law, the Muslim world sees Barack Obama as a Muslim,” Graham said, before explaining that he could not rule out the possibility that Obama may secretly be Muslim. “I can’t say categorically [that Obama is not a Muslim] because Islam has gotten a free pass under Obama.”

"I thank God," said the Pharisee, "that I am not as other men are."

But it's the evangelical logic here that is really arresting. We had thought that Franklin Graham wanted to convert the world to Christianity, but by Graham's doctrine of genetic determinism, if you've got a Muslim somewhere back there in your male line (note to women: you don't count, which goes without saying), no amount of conversion will ever wash you clean of the perversion.

Posted by J.W. Williamson at 2/21/2012 11:05:00 AM
Email ThisBlogThis!Share to TwitterShare to FacebookShare to Pinterest
Labels: Barack Obama, Franklin Graham, religion and politics

Really the man is beyond the pale. A lot of good people try to serve a lot of needs in the third world under the umbrella of his organization, but the example of leadership he sets on every hand is a huge turnoff for this progressive Christian.

Franklin Graham is an embarrassment. I doubt his Dad would ever judge people's faith the way he has...

Not to mention the ratings on the efficacy of donations to Samaritan's Purse - low because of his embarrassing salary.

Don't listen to the spin said...

The way I read it, Rev. Graham didn't judge whether Obama is Muslim, but rather he said that the *Muslim world* views him as a Muslim because of his heritage. That also does not imply by any means that a Muslim (or Jew or xyz) cannot be judged by God and found to be a true believer in Jesus Christ. Men cannot judge that because we can't see what is in another person's heart, and Graham certainly knows this.

Well, Graham sure loves judging people. Did you see the whole interview? He most certainly did question the President's faith while professing Santorum and Gingrich (of all people) as good Christians. Franklin puts on a show but does not hold a candle to real Godly men.