Etheridge: Not Ready for Prime Time? 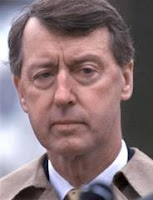 Newly declared Democratic candidate for governor Bob Etheridge was not prepared for two obvious questions at his first press conference last Friday: do you support Gov. Perdue's proposal to restore the 3/4ths of a penny increase in sales tax to fund education and do you support the NC proposed constitutional ban on gay marriage?

Etheridge ducked both questions, saying about the gay marriage amendment that it's up to the voters. Whoa.

After letting the dust swirl all weekend, Etheridge was on the phone today to the News & Observer to amend his previous duck-age: he's for Gov. Perdue's proposed sales tax increase and against the gay-marriage amendment.

But he may have only made matters worse by going out of his way to express his distaste for the underlying marriage equality issue: "We actually have a statute on the books that says a marriage is between a man and a woman, which I agree with that...."

The political straddle is as awkward as that syntax. Can we get us a candidate up in here who has come fully into the 21st Century?

I am not sure Obama is ready for Prime Time. Obama returns to big time donors for super pacs. What say you JW?