Talk to the Hand, You Sorry [Expletive Deleted] 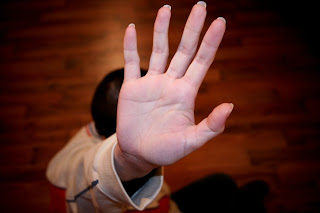 First, it was Thom Tillis, slumming it up in Boone, who spoke of his great personal pain over the Anti-Family Amendment that he nevertheless personally ushered through his Republican-controlled NC House.
Now it's Sen. Jim Davis (R-Franklin) who's suddenly developed buyer's remorse over his vote to urge the rest of us to install anti-gay discrimination into the NC Constitution next May.
At a "sparsely attended" townhall meeting in Macon County, Davis said, “I have a lot of libertarian in me. I believe firmly, passionately that a marriage should be defined as being between one man and one woman. But I also believe with all my heart that in a free America people who choose to live a different lifestyle should have a legal right to do so."
Yet (and you'll forgive me if I'm unimpressed by your sudden pangs of conscience), you voted with the other lemmings in your party to enshrine a constitutional discrimination against a small minority of our citizens into our foundational document...
(You insufferable hypocrite you. With all due respect.)
Posted by J.W. Williamson at 12/02/2011 02:37:00 PM
Email ThisBlogThis!Share to TwitterShare to FacebookShare to Pinterest
Labels: gay marriage, Jim Davis, Thom Tillis

Your characterization is not only misleading, it is intellectually dishonest, and you and I both know it.

I understand that it is your job, as blog owner, to spin events in a light which favors your political party for the sake of those who did not attend the event, but this is too much.

There is a massive difference between voting in favor of a bill and voting to allow a bill to go to a referendum of the people. You clearly represent this as support for the bill when it is not that at all.

On a fundamental, intellectual level, I believe that my opposition to this proposed amendment is more pure, more honest than yours, as yours is tainted by unwavering partisan politics. Yet I will not condemn a politician for letting it go to a vote of the people. You and I will both vote against this amendment, and you have no clue how the two men whose character you impugn will vote on it. But my vote, and possibly theirs if they vote against it, will likely be more pure than yours. After listening to Tillis, I am not at all sure that he will vote for the Amendment. You seem quite sure. What he does in the voting booth is beyond you and me. It is his personal choice, and the sheer fact that he indicated that he is torn on the issue suggests to me that he will vote against it. But you don't care, do you? You want the voters to be denied the opportunity to vote on it.

That is what separates me from you, J.W., I can accept that my preferences, my ideology may be overruled by a majority who oppose my view, or by a rule of law that contradicts my view. Sadly, you cannot accept such things. You must spin anything which conflicts with your party line as something diabolical, and anyone who allows a public vote on an issue which may not favor your party line political philosophy must be demonized as sinister.

The more you use expletives, the more it tells me the democratic process is working.

Mike D.,
I know you to be consistently smug about your own intellect. But are you also that naive?

The so-called "Defense of Marriage" amendment was relentlessly "whipped" by the Republican majority in the Gen'l Assembly, and Party loyalty was both demanded and expected ... because the amendment is a political maneuver to stir the rural/religious vote in 2012. Those who could not in conscience vote for it were invited to be absent that day, and a handful were absent (in the Senate particularly).

So I'm not impressed by any of those yea votes now crying their crocodile tears. They launched the mechanism to set this state back 100 years. If that mechanism now makes them nervous, I don't want to hear it. "Let the people decide"? Please! "Let the prejudices flow!" is more like it, and if they didn't know that would be the result of their legislative mischief, they are dim bulbs indeed.

Mike D
I agree 100% with what you have said. Allowing the citizens of the state to vote on the issue is certainly not something I would condemn the legislature for.

And, like you, I will vote against the amendment.

I don't believe in allowing the majority to decide on abrogating the rights of any minority. Too much probability or returning to Jim Crow years, after all. As Margaret Chase Smith (a good Republican) used to say, "The People will choose repression every time."

opinionated...I'm not really in disagreement with your point....but I am not aware that anyone has the "right" to marry someone of the same sex. If there is such a "right" then it was put in the constitution by a "majority" and could be changed via the amendment process. In which case the majority would still decide.

As for Mike D and his ilk, I suppose they think it would be also be fine to let the people decide on issues such as slavery. Yeah. That's right. Put up for vote whether or not a certain "class" of citizens should have the same rights as the rest of us. I think we should put up for vote whether Mike D should be allowed to work for the state since he supports GOP efforts to dismantle workers' rights.

Tillis (and Mike D) is just trying to have it both ways: "I don't like it but I was forced to do it."

"Mike D and his ilk" - Anonymous

I wish I knew where to find my "ilk"! I have never met anyone who holds my peculiar set of political views, but maybe if I find them someday, we will form a club or something. Thanks for providing me with hope! :-)

Years ago, comment moderation was not activated on WataugaWatch. Anyone could say anything. There were a couple of people who tried to employ personal attacks that rose to the level of releasing personal information and targeting the livelihood of fellow contributors. In those days, Stumpy and BikerBard would step forward and defend me in the face of the personal attack, even though we disagreed on many political issues. I miss them both, as friends in real life and contributors to this forum. They were great guys, and I will always keep the memory of them alive.

I understand that the current political landscape is highly charged, and the Tea Party and Occupy movements are both working to turn us against each other. I do find it ironic that this Anonymous contributor would, in successive sentences, decry people for daring to deprive individuals of their rights to live free of oppression, then immediately threaten to deprive another contributor of his right to have a job, simply because he dares voice his opposing viewpoint publicly (keep in mind that I openly declare my opposition to the proposed amendment).

So, as much as I have appreciated J.W. for allowing my voice, my participation, in this forum, I feel that my continued participation is unwelcome and unwise.

I have enjoyed the company of all of you, and many of you have made me feel welcome, even feeling like friends I have never had the pleasure to meet in person, and I invite you to come shake my hand if you know who I am and you see me somewhere.

If our society calms down a bit, I will certainly come back, and I will absolutely drop in to enjoy reading what you all write, but I feel I should bow out for a while. These are tough times, and I really can't afford to lose opportunities because someone feels that silencing my voice should include threatening my livelihood.

Classic Mike D: "My vote is more pure than yours."

Wow, Mike D... I thought your skin was thicker than that! Obviously no one is going to vote on whether you can have a job or not... I think the poster said that just to point out how ridiculous it is to let people vote on things that only affect other people. The gay marriage amendment will have a real, lasting effect on me and many others who are not allowed to legally married the person of their choice. It will have absolutely zero effect on these people who are voting for it. So, for you to be so cavalier and dismissive about it would be like me acting the same way toward the "Mike D Amendment" that Anonymous proposed. Why shouldn't the people be allowed to vote on Mike D's job prospects??

"I think the poster said that just to point out how ridiculous it is to let people vote on things that only affect other people."

You mean like letting people vote to raise taxes on someone else who makes more than they do?

I missed that one, Anon. Exactly when is that vote being held??

Anytime you vote for a candidate who promises higher taxes on someone else so you can get something, you're voting for higher taxes on someone else. Vague terminology like, "fair share," or,"we are the 99%" is the code language. I'm not really surprised I had to explain this here, or perhaps you're just trying to be obtuse in a pathetic attempt to undermine my point.