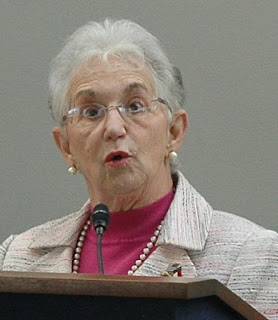 It was clear from the outset of the Todd Poole drunk-driving-and-resisting-an-officer arrest in Watauga County that Congresswoman Virginia Foxx intended to see him successfully through the judicial process. In a Roll Call interview published on August 12th, three days after her Chief of Staff was taken before a Watauga County magistrate and charged with three different offenses, the Congresswoman said that her employee had her support and would keep his job.

“He’ll remain on the staff. It’s a judicial matter and it will work its way through the process,” she said.

The current odor of special treatment for Poole (from both a DA and a judge with long political ties to the Congresswoman ... Judge Horne was not too long ago Chair of the Watauga County Republican Party during Foxx's rise to greatness) has centered on the sealing of Poole's blood alcohol test.

According to Scott Sexton in the Winston-Salem Journal, in his column on Dec 18, "[Poole] refused a breath test, but troopers got a sample of his blood and sent it off to the State Bureau of Investigation."

That's very different from what the Roll Call reporter was told for the article linked above:


A Watauga County, N.C., deputy clerk confirmed the authenticity of the record and that Poole was “taken to the magistrate’s office,” that is, arrested. A court date is set for Sept. 13, the deputy clerk said.

“He blew a .08,” the clerk said, indicating that Poole was at the legal limit of intoxication under state law....

Passing strange. Would .08 alcohol content in one's blood make one act like Todd Poole acted that night? Maybe. Or perhaps the deputy clerk was wrong, but by what stretch does a deputy clerk of court make that up and tell it to a reporter for a Washington newspaper?

Clearly, someone talked before the Foxx Cone of Silence fell over this whole episode.

Posted by J.W. Williamson at 12/22/2011 09:38:00 AM
Email ThisBlogThis!Share to TwitterShare to FacebookShare to Pinterest
Labels: Todd Poole, Virginia Foxx