From Slaves-to-Knowledge To Just Plain Slaves 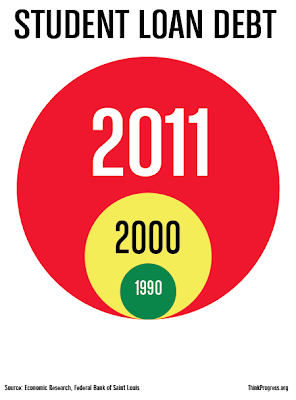 If a college education is not worth what is being charged, then don't go.

Anonymous, We used to believe that education is primary value, that everyone benefits when the public is educated. As Thomas Jefferson said " 1786 August 13. (to George Wythe) "I think by far the most important bill in our whole code is that for the diffusion of knowledge among the people. No other sure foundation can be devised, for the preservation of freedom and happiness...Preach, my dear Sir, a crusade against ignorance; establish & improve the law for educating the common people. Let our countrymen know that the people alone can protect us against these evils [tyranny, oppression, etc.] and that the tax which will be paid for this purpose is not more than the thousandth part of what will be paid to kings, priests and nobles who will rise up among us if we leave the people in ignorance."[2]

I believe the priests, kings, and nobles have already risen amongst us and we are paying their tax.

So you are saying that the public should have to pay for the waste in the higher education system rather than those that are benefiting (maybe) from the system? How about if we force the system to get rid of the waste by giving them a budget instead of a blank check?

According to Thomas Jefferson and the people who wrote the NC state constitution, education benefits the whole of society. Section 9 of the state constitution clearly and unequivocally states that "The General Assembly shall provide that the benefits of The University of North Carolina and other public institutions of higher education, as far as practicable, be extended to the people of the State free of expense."

Have just read today the statement which includes "breathtaking mendacity. Since I am no "college educated" I had to look that up in the dictionary. I was raised and educated in CA schools way back when education meant something. In later years while living in NC I regretted placing my 3 children in NC public schools. The lower standard of teaching and education there put my children in such a lazy, slow action mode as far as their studies. They were so far ahead of the NC system it wasn't funny. Sadly, all school systems are no better than NC's were in 1970. Students need challenging classrooms, teachers, homework, Physical Education, Music and Band, and a large variety of other subjects like Shop, Home Ec, ENGLISH ONLY classes! So far as I can see the LARGEST problems in our schools is that with the influx of illegals and ALL OTHER students who DO NOT SPEAK ENGLISH and still don't speak English before they are admitted into a regular class, grades, interests, dropouts, etc., continue. What IS the reason other countries schools have higher educated students. You just read the answer. Teachers began to spend most of their time "trying" to help those poor, "no speak English" children and upper grade students that American students lost more than just a higher grade than A or B! Teachers were then taxed with having parent teacher-aides cancelled. Not that those parent aides were paid. They were 100% volunteers! Oh, THAT must have only happened on both the Bush's watch, right? According to the present White House puppy dogs it is all Bush's fault. Oh well, my say has been said. In looking at the statement from Brushfire which says, "improve the law for educating the common people. Does that mean illegals who pay nothing for almost everything, who live 2 or 3 families to a home and all work illegally and pay no taxes and send all of their money back to Mexico because they have all the free "gifts" of the US via food stamps, free ER care, even Social Security-having NEVER paid into the system? I think not but that almost God - Hussein Obama keeps giving more to the poor. Praise Obama!
NOT! I have worked most of my 74 years and am a proud American who lives on less than some of these illegal aliens with 5 or more children! When my children need something I provide it I do not look to the government of this great country to provide for them!
Oops, guess I am a tyrant! Oh,well, I am a legal citizen even though I feel my rights are decreasing! To Anonymous I add,there is so much waste in all educational systems in our country, not just higher ed. And I do agree. budgets are definitely better than blank checks! However, budgets AND blank checks can both be misused! From all sides! Look at the US debt crisis! Oh, THAT is Bush's fault also! I don't think so!