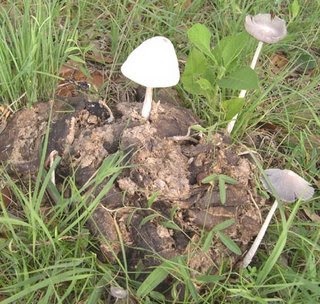 Several readers have sent me the link to Mudflats, an Alaska blog written by an East coast native who's lived and worked in Alaska since 1991. This blogger offers more insider specifics on the curious case of the rise of Sarah Palin. First up: Palin's Big Lie that she opposed "the bridge to nowhere" earmark. T'ain't true. "Total fabrication," says Mudflats, who proceeds to offer the irrefutable evidence.

The giggling over Palin among the Sunday Morning Gasbags was under tight control, though the only talking head worth listening to, Republican operative Mike Murphy, who ran John McCain's campaign back in 2000, delivered the only opinion worth the combined hot air: Sarah Palin can make the religious right giddier than the prospect of themo-noookalar war with Russia, but if all she does is solidify McCain's base, she's done NOTHING toward winning this election.

The big giggle moment of the morning came when Cindy McCain said Sarah Palin had foreign policy cred on the basis of Alaska's being so close to both Russia and Canada, two of our most despicable socialist enemies, after Obama, of course. By this reasoning I consider myself an expert on oil and gas, since I grew up adjacent to the oil patch in Texas. Hell, all my uncles were roughnecks on oil rigs, so maybe I ought to be Secretary of Energy! George Stephanopoulos, bless his heart, kept a straight face throughout Cindy McCain's rap.

Under the topic heading ... The Things a Whore Has To Say and Do: A couple of weeks ago Karl Rove belittled Tim Kaine as a possible Democratic Veep pick on Face the Nation:

With all due respect again to Governor Kaine, he's been a governor for three years, he's been able but undistinguished. I don't think people could really name a big, important thing that he's done.

He was mayor of the 105th largest city in America. And again, with all due respect to Richmond, Virginia, it's smaller than Chula Vista, California; Aurora, Colorado; Mesa or Gilbert, Arizona; north Las Vegas or Henderson, Nevada. It's not a big town.

Oops. It takes a whore to swallow the big ones. Friday on Fox News -- and exhibiting absolutely no involuntary gag reflex -- Rove bragged about Sarah Palin:

She's a former mayor. She's the mayor of, I think, the second largest city in Alaska before she ran for governor.

For the record, Wasilla, Alaska, was not even the 10th largest city in Alaska. It's smaller than Chula Vista, Aurora, Mesa, Gilbert, North Las Vegas, and Henderson.

With all due respect.
Posted by J.W. Williamson at 8/31/2008 11:37:00 AM
Email ThisBlogThis!Share to TwitterShare to FacebookShare to Pinterest
Labels: Cindy McCain, John McCain, Karl Rove, Mike Murphy, Sarah Palin