The Rapture Is Temporarily On Hold 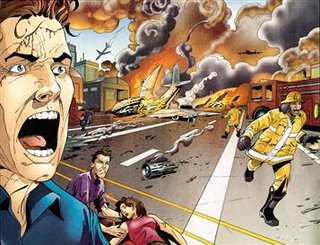 Tim LaHaye and Jerry B. Jenkins, authors of the mega-selling "Left Behind" series of books, which flatter the prejudices of millions of Christians while reveling in the imagined death and destruction of millions of human beings, have bestowed their wisdom on the world yet again and declared that Obama is NOT the Antichrist. That astounding pronouncement, from atop a mountain of money earned for some of the worst prose this side of James Fenimore Cooper, will predictably receive less attention among the superstitious than did the original LaHaye and Jenkins fiction.

H.L. Mencken, who beat the rest of us to hell decades ago, is possibly smiling amidst the divine napalm: "There's no underestimating the taste of the American public."
Posted by J.W. Williamson at 8/11/2008 08:51:00 AM
Email ThisBlogThis!Share to TwitterShare to FacebookShare to Pinterest
Labels: Barack Obama