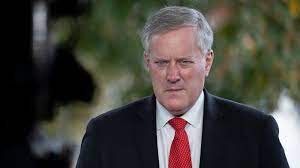 CBS17 was the first to report yesterday afternoon that the State Bureau of Investigation had completed its investigation of voter fraud allegations against former Trump Chief of Staff Mark Meadows and had submitted the file to the attorney general. It's up to the AG's office to assess the facts and bring charges or not.

Ordinarily, county district attorneys would investigate and potentially prosecute voter fraud cases, but when it came to light that Meadows had voted in 2020 from an address in Macon County where he never lived, Macon County DA Ashley Welch, a Republican, asked the AG's office to relieve her of the case.

In April, the Macon County Board of Elections removed Meadows from its voter rolls. He last voted in 2021 from an address in Virginia.

Posted by J.W. Williamson at 12/14/2022 09:31:00 AM
Email ThisBlogThis!Share to TwitterShare to FacebookShare to Pinterest
Labels: Mark Meadows

Once Fascists suspend the Constitution they(and only they) can vote from anywhere (as many times as they wish).