Who Deliberately Lies in a Published Memoir? Why, Mark Meadows, Natch! 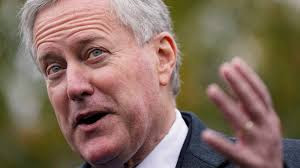 Under the Federal statute defining "conspiracy to the defraud the U.S.," the January 6th Committee believes that former NC Congressman and Trump Chief of Staff Mark Meadows is worthy of referral to the Department of Justice for prosecution.

According to the News and Observer, the committee's report names Meadows some 50 times:

...the committee said it believes that Meadows included several “intentional falsehoods” in his December 2021 book, “The Chief’s Chief.”

One example cited in the report involves Meadows’ recollection of Trump’s intentions after he spoke to supporters at the Ellipse, before many of them walked to the Capitol grounds. In his book, Meadows wrote that when Trump walked offstage, he told Meadows he “had been speaking metaphorically about the walk to the Capitol.”

“He knew as well as anyone that we couldn’t organize a trip like that on such short notice,” Meadows wrote. “It was clear the whole time that he didn’t actually intend to walk down Pennsylvania Avenue with the crowd.”

According to committee members, however, Meadows’ recollection in the book “appeared to be an intentional effort to conceal the facts.”

“Multiple witnesses directly contradicted Meadows’s account about President Trump’s desire to travel to the Capitol, including Kayleigh McEnany, Cassidy Hutchinson, multiple Secret Service agents, a White House employee with national security responsibilities and other staff in the White House, a member of the Metropolitan Police and others,” the report states.

Posted by J.W. Williamson at 12/21/2022 09:04:00 AM
Email ThisBlogThis!Share to TwitterShare to FacebookShare to Pinterest
Labels: Donald Trump, Mark Meadows

Maybe Trump has a body double , but 30 years younger, 40 IQ points smarter, a 200 pound body builder with a six-pack and pile-driver arms, who can actually drive a Suburban over rough terrain and a golf ball 300 yards... and maybe that was the guy Meadows was talking to, or he couldn't tell the difference from the catsup bottle thrower screaming at the TV in the back room. Maybe Meadows has been in the DC (or Marvel) Universe too long, or maybe he belongs in a rented trailer by himself way back up in the High Country, with an ankle monitor.