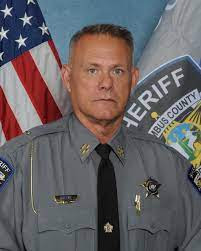 The now notorious Sheriff of Columbus County, NC, Jody Greene is about to have his tenure in office decided by another judge.

To recap: Jody Greene was elected sheriff in 2018 by a margin of less than 40 votes. Last October, racist diatribes against his own Black employees went public, secretly recorded by his chief deputy, who opted to run against Greene in November. The district attorney, Jon David, based on those phone conversations and other evidence that began to emerge, petitioned the courts to have Greene permanently removed from office as unfit. The DA had said that he could no longer rely on Greene's testimony in criminal trials because of the sheriff's blatant racism.

Before there could be a hearing on the DA's petition for permanent removal, Greene up and resigned, though his name remained on the November ballot. And sure enough, Columbus County voters reelected him with a little over 54% of the vote. Of course they did.

At the time, the DA vowed that if Jody Greene were actually sworn in for another term of office, he, Jon David, would refile his petition for removal. And that's exactly what he's done. Greene was sworn in yesterday. The DA submitted his new petition also yesterday. Both sheriff and DA are Republicans.

Among the allegations against Greene:

Arresting his perceived political enemies — including a county commissioner who Greene had arrested, after he was recorded threatening to arrest him if he voted against a budget increase for the sheriff’s office.

Threatening county commissioners with retribution in other ways, including by removing air conditioning units from a local middle school and sending investigators to one commissioner’s business.

Sexual harassment, involving an affair with a deputy under his command.

Damaging government property, for a broken window that allegedly stemmed from a tryst with that deputy.

Failing to protect people in county custody, after one man was left with severe brain injuries from a beating that jail staff under Greene’s command failed to stop.

What I want to know is how you break a window having sex with an employee. I've run several scenarios through my Imaginator 4000, and only one makes any sense at all.

Posted by J.W. Williamson at 12/30/2022 09:37:00 AM
Email ThisBlogThis!Share to TwitterShare to FacebookShare to Pinterest
Labels: Columbus County, Jody Greene