How I Became a Man To Be Feared 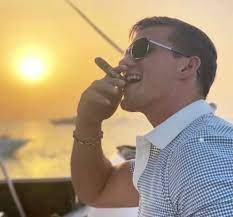 Always concerned about the healthy future of man-kind, Madison Cawthorn gave his farewell speech on the floor of the US House, and I can't help feeling that he was aiming his words directly at me:

“It used to be a rite of passage in this country for young men to be punched in the face when they did something stupid. Our nation used to believe that there was strength and purpose in taking the hits, learning from your mistakes and growing through the adversity,” Cawthorn said.

“America is weak. Her sons are sickly, and her daughters are decrepit,” he continued. “Our country now faces the consequences of enabling a participation trophy society. We’re no longer the United States. We’ve become the nanny state. Our young men are taught that weakness is a strength, that delicacy is desirable, and that being a soft metrosexual is more valuable than training the mind, body and soul.”

“I ask the young men of this nation a question,” Cawthorn said. “Will you sit behind a screen while the storied tales of your forefathers become myth? Or will you stand resolute against the dying light of America’s golden age? Will you reclaim your masculinity? Will you become a man to be feared? To be respected? To be looked up to? Or will you let this nation’s next generation be its final generation?”

Well shit! This wise man, this man's man, has seen me for what I am, even though he's never seen me. How many ounces of my precious bodily fluid have I allowed to dry up while getting my hair styled, my nails cured, my body sculpted? How much money have I wasted on "product." So I went out immediately and bought a bullwhip -- took a while to find a vender for that one! -- and a good 7-inch fixed blade fighting knife (I was shopping on line, so I impulsively threw into my cart a Benchmade Infidel Dagger switchblade for a mere $450). I am equipped! (Even if it's going to take a few more washings to get that perm out of my hair.)

I started kicking sleeping dogs, if they were someone else's dogs. My own is being retrained for combat, and I darsn't. I'm currently shopping for a big-ass overpowering truck with an armored cab, and I've begun to hang out where the tough guys are, at stampedes and rodeos and cigar-tastings.

I don't take no backtalk from women, either, especially the "decrepit" younger ones who are always posing for selfies anyway, and you can get almost anything past them. I eat my meat raw. I think I might now have become a man feared, because I notice more people avoiding me.

Thank you, Madison, for showing us The Way -- all the weak ones.

Posted by J.W. Williamson at 12/04/2022 08:52:00 AM
Email ThisBlogThis!Share to TwitterShare to FacebookShare to Pinterest
Labels: Madison Cawthorn, Trumpism

Good to hear you're manning up.

Now you can work on fixing your politics.

And don't forget to order your food extra spicy at the Mex restaurants.

I beg to differ with you about not taking backtalk from women. I know of one woman who definitely gives you a lot of back talk.

Have you been spying on my, Elaine?