Conor Lamb in the Home Stretch 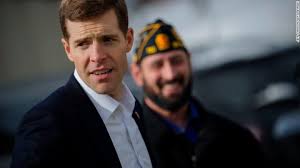 According to Jonathan Martin, conservative groups have spent $10 million in the 18th Congressional District of Pennsylvania to defeat this man, Democrat Conor Lamb. They're totally freaked that Lamb could win the district in a special election on Tuesday. Trump carried the same district in 2016 by 20 points, and a Dimmycrap wasn't supposed to hunt here.

I've written about Lamb a couple of times before, here and here.

It's not just the crowd appeal of Conor Lamb, though he obviously has that. It's the "Trump effect" -- the growing wave of revulsion over the behavior of a buffoon. If Lamb wins on Tuesday, Joe Biden predicted a whole new wave of Republican retirements from Congress, as the reality of the Trump effect sinks in a little deeper.