A Strong Democrat Running for NC House in Competitive District 1

The North Carolina Free Enterprise Foundation lists House District 1 (Bertie, Washington, Chowan, Perquimans, Tyrrell, and Camden counties near the coast) as "competitive," and if Democrats take the NC House this year, they will ride in on their strength in competitive districts. House District 1 is 54% registered Democrat, though we know that doesn't necessarily mean victory, and Bertie County alone contains some 25% of the voting population in the district. This is an open seat, as its representative in the NC House, Republican Bob Steinburg, opted to run in Senate District 1 this year. 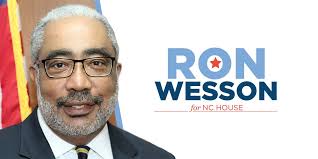 Democrat Ronald D. "Ron" Wesson is impressively qualified to win the seat. He's been elected and then reelected as a Bertie County commissioner, and he's served as both the chair of the board of commissioners and currently as vice-chair. He was born and raised in Bertie County, and he's married to a psychiatrist in private practice, Dr. Patricia W. Wesson. Ron completed his undergraduate work at UNC-Chapel Hill and his graduate studies at The Sloan School of Business, Massachusetts Institute of Technology, and then joined the Dun & Bradstreet Corporation where he served for more than 31 years, retiring as a senior vice-president and Global Leader. In 2004, Black Enterprise Magazine named Wesson one of the 50 most Influential Minorities in Business. Returning to Bertie County after retirement, he threw himself into community service, became chair of the Bertie County Chamber of Commerce, joined the Rotary Club, the Bertie County Community Foundation, and the Bertie County Schools Foundation. He moved into public service in 2012, running for and winning his seat on the county commission. He was actively recruited for this race by the Democratic House Caucus.

He owns an impressive pickup truck.

He says on his website, "Any success that I have had in business and in life, can be directly traced to the investment that others have made in me. I have always been encouraged to look beyond one’s self and seek to support others in ways that I have been supported. My Mother once said to me…'Son, God has blessed you with enough sense to do pretty much anything you set your mind to do. You will find that there are a lot of much smarter people out there, but never let anyone out work you to achieve your goals.' I have endeavored to live by this advice, and if given the opportunity, I look forward to working hard for the citizens of North Carolina’s 1st House District."

There's a Republican primary on the other side between Candace "CV" Hunter, a TV personality, and Chowan County Commissioner Eddy Goodwin. I'd put money on Hunter in the primary. She's blond and a big ole Christian conservative. You know how Republicans are about that stuff.

Classic Truck! Good luck to him, he looks like the kind of person we need a lot more of in Raleigh.

That truck is a beaut, and he sounds like he (and his Mama) know a thing or two!