Speaker Tim Moore: Big Spender, But Not So Good At Reporting It

Following up on this post RE Speaker of the North Carolina House Tim Moore's amended campaign finance reports, WBTV investigative reporter Nick Ochsner is on the hunt:


We caught up with Moore on his way into a Cleveland County Board of Commissioners meeting [Moore is also the highly paid legal counsel for the Cleveland Co. commissioners]....

At first, Moore claimed to not be aware of the discrepancies found on his campaign’s finance reports.

“We have always filed everything with the reports as they are due, so I don’t know what you’re talking about,” Moore said.

“I disagree with your assessment entirely,” Moore said. “Everything on my campaign finance reports are documented fully. That’s a very unfair question and statement you just made.”

When a reporter pointed out to Moore that his campaign had recently amended five years of finance reports, he disputed that.

“You are wrong. I mean, my campaign records have been filed the same way over the years. I just had an audit from the state board of elections—a random audit they do every year—that said everything we’ve done has been fine.”

Moore ended the conversation without acknowledging the amended finance reports his campaign had recently filed as a result of the state board of elections’ audit.

Some of what those amended reports show ... Speaker Moore is a big-time dispenser of steak dinners for unidentified BFFs:


The detailed credit card charges filed with the amended versions of Moore’s campaign finance reports show the Speaker spent more than $7,000 at steakhouses between the fourth quarter of 2010 and the first half of 2015.... 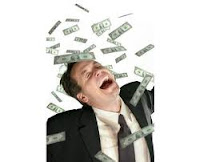 For instance, Moore racked up nearly $500 in receipts during the first week of November 2014. On November 4 he charged $216.18 at Sullivan’s steakhouse in Raleigh. Two nights later, on November 6, he charged $246.19 at Ruth’s Chris Steakhouse in Cary.

When asked about the expenses, though, Moore defended the charges that, until recently, had gone un-reported.

“If there were meals, that’s where I’m taking out a large group of folks who may come up and visit or other legislators,” Moore explained.

Ah yes! Those blessed Republicans and their red meat!

Posted by J.W. Williamson at 11/13/2015 10:56:00 AM
Email ThisBlogThis!Share to TwitterShare to FacebookShare to Pinterest
Labels: Tim Moore, WBTV

Hey! That tea party blogger you admire so much also says that the finance reports reveal that (1) Tim Moore reimbursed himself for in-kind contributions, (2) paid rent to himself on property he owns, and (3) paid himself to campaign for himself. Hahahaha! Take a look: http://dailyhaymaker.com/?p=12905