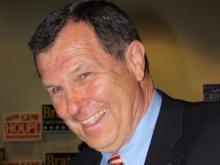 Brawley's current banner is opposition to adding toll lanes to I-77 north of Charlotte, a project pushed by Mr. Tillis.

Oh, Brawley knows Tillis and has every reason to hate his guts. Tillis fired Brawley as chair of the Finance Committee in the NC House and appears to have had a heavy hand in making sure that Brawley was primaried for his Iredell County House seat in 2014, which Brawley indeed lost. Brawley had charged that Tillis loves money more than he loves the truth. Tillis implied that Brawley is mentally unstable.

Our favorite factoid about Robert Brawley involves a bill he introduced in the General Assembly in 2013 to lift the ban on lobbyists' gifts to lawmakers. Brawley, who has served in the General Assembly off and on since the early 1980s, remembered the good old days with the good old boys, enjoying drinks and expensive dinners and golf trips, and thought it would be a good idea to bring back the fun times. That bill quickly died.

Now Brawley's deal is the I-77 toll lanes. According to the News&Observer, Brawley had been planning a rematch against the dude who beat him out for the NC House, Republican John Fraley, but yesterday, Brawley was noticeably inflated by all the support he was hearing and said he might just challenge McCrory for the governorship.

Where does McCrory stand on toll lanes on I-77? He stands exactly where he stands on every other issue where he's afraid someone might not like him -- especially the money guys -- if he takes a stand. He stands nowhere. He dodges. He is the inartful dodger.

Meanwhile, Mr. Brawley, may we buy you a drink?