King of Spades Unhappy With His Own Jokers 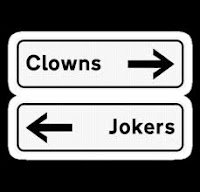 Secrets? Yes, indeedy. At their October 30 meeting, the BOG raised the salaries substantially of 12 university chancellors, and did it in a closed meeting, which appears to violate the open meetings law.

Well, you appointed 'em, so I guess you can order 'em around like the flunkies they are.

BOG "leaders" (and it's unclear who that includes), along with lawyer Shanahan, have also been ordered to appear before the Joint Legislative Commission on Governmental Operations, which Berger and Moore jointly chair, next week -- presumably for a dressing down. From the N&O report, it sounds as though the BOG's violation of the open meetings law will be a major topic -- not so much that the press and the public were shut out but that Berger and Moore were kept in the dark.

Posted by J.W. Williamson at 11/13/2015 10:07:00 AM
Email ThisBlogThis!Share to TwitterShare to FacebookShare to Pinterest
Labels: Phil Berger, Tim Moore, University of North Carolina