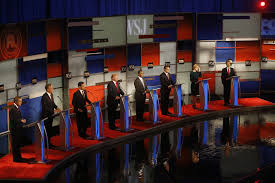 
Trump, Carson, and Rubio are hitting the first question outta the Republican ballpark: Should we raise the minimum wage? No, they say, but in this ballpark, it's a display of pure charity. Trump actually allowed as how wages are "too high" now and that "people have to go out, they have to work really hard and have to get into that upper stratum." I'm doing you a favor to keep you at $7.25 an hour. (Or you could borrow a million dollars from your daddy!)

Carson, always ready with a line that can be demonstrably disproven: "Every time we raise the minimum wage, the number of jobless people increases." Fact checkers, go! (And, indeed, that statement isn't true.)

Rubio danced. My parents made minimum wage, and look at me. Ain't I purty?


Bush would repeal every law that Obama even breathed on during the last seven years. Internet. Clean Power. Water. Repeal 'em all. Bush is Mr. Strong Man this evening!


Someone pushed "play" on the Fiorina machine! When she starts, she doesn't stop. Most rehearsed candidate by far, except for Cruz, who has his zingers queued up and ready to go.


Rand Paul: "I think that we ought to look where income inequality seems to be the worst. It seems to be worst in cities run by Democrats, governors of... [APPLAUSE]. States run by Democrats and countries currently run by Democrats." Well, now. North Carolina is completely run by Republicans, and how do we stack up? Higher unemployment, a new tax system that favors the rich.... How about Kansas, that model of Republican management?


Scuffle has broken out over immigration. Kasich starts a fight with Trump after Trump reaffirms that he's going to ship 5 million people out of the country. Kasich says, "Come on, people. It's a silly argument." Trump disses Ohio. Kasich defends Ohio's honor. Trump: I'm rich. I don't have to talk to Kasich. Boos.


Cruz is ready with one of his rehearsed lines: "If Republicans join Democrats as the party of amnesty, we will lose." Then, because attacking the media got him the biggest applause in the last debate, Cruz goes after the press in a clever way: "I will say the politics of immigration will be very, very different if a bunch of lawyers or bankers were crossing the Rio Grande. Or if a bunch of people with journalism degrees were coming over and driving down the wages in the press." Best line of the night.


The Cruz polish gets a scuff mark: He sez he would cut five agencies: IRS, Commerce, Energy, Commerce, and HUD. Paging Rick Perry!


Paul and Rubio in a fight over Rubio's child tax credit proposal, which Paul calls an entitlement and which therefore means Rubio is not a conservative. Rubio: Family values, family, fam'bly! Rubio fights back, implying Paul is a big wimp because he doesn't want to pour more money into the military. Everybody else begins to pipe up like hungry sea gulls that they want a big military too, goddamn it! Fiorina is positively gonna stomp all over this globe with her armed forces!


Trump says the TPP trade deal is the worst trade deal in the history of trade deals because it advantages China, which is burying us. Paul calmly zings back: China isn't a part of the TPP deal. Trump falls silent.


Carson's plan for ISIS: We have to make them "look like losers." We do that by taking their oil fields and then destroying them. "We could do this, I believe, fairly easily." Carson says he learned that from "several generals." Come on, folks! ISIS is just like 8th grade nerds. Take their lunch money, pants them, and shove 'em in a locker!

Fiorina says she's met Putin not in a green room, like Trump, but in a private meeting. Fiorina is like the president of the most exclusive sorority on campus, putting a rival sorority in its place. "There's that Vladimir Putin. Let's not talk to him!"

Trump comes mighty close to saying STFU to Fiorina. "Why do you keep interrupting everyone? Terrible!"

Kasich, who's barged into other candidates' statements several times and is the real interrupter, is now whining about not getting enough time in this debate.


Fiorina sez for at least the third time: "We have got to take our country back." But did anybody keep the receipt?

Donald Trump said that no debate should go more than two hours, so we break away now to watch Trevor Noah.