The Voter Reg. Group Blocked From High Point Univ. Was a Conservative Org. 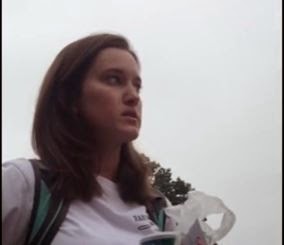 Meet Leigh Thomas, the chair of the High Point University Young Republicans, who since yesterday has become the poster child for voter suppression. She was videotaped laying down the law to campus security that she did not -- positively did not -- want any voter registration happening on her campus:

The video made the rounds yesterday morning on social media before it was made "private," but it soon reemerged and has become ever more famous.

Chad Nance at Camel City Dispatch has done due diligence in tracking down the agencies and personalities revealed here, and it's fairly amazing to discover that the independent voter registration effort at High Point University was being conducted by Turning Point USA, a conservative group promoting Republican policies.

Nance extrapolates the reasoning non-thinking process employed by Young Republican Leigh Thomas, who apparently has the power at High Point University to order campus security to do things to her liking:


So what is behind this ding-bat decision? Has Thomas gotten a crazy notion that “Only liberals like registering voters” somewhere in the un-plumbed depths of this young lady’s mind? Is the state party apparatus so terrified of the mythological youth vote that they have ordered college Republican groups to do whatever is in their power to make sure that no new voters are minted on university grounds? Has Thomas been so conditioned by repetitive exposure to propaganda geared toward convincing Republicans that the entire elections system is rife with fraud, registering voters might be a little gay, and a small group of elites with a right to vote based on economic status might be a pretty good idea down the line?

Is this spill-over from the very real efforts by the North Carolina GOP establishment to clamp down on and marginalize truly grassroots activists and candidates? ...

Young Republicans take orders from up the food-chain, and they've been told that registering their age group is just bad for maintaining Republican power.

We don't know from nothing about High Point University, but Chad Nance seems authoritative in his characterization of that campus:

HPU is the school where rich people send their dumb kids who can’t cut it at elite schools. They’ve spent millions of dollars transforming themselves into a Walt Disney version of a university where the one-percenters can install their kids, apparently safe in the knowledge that some of them won’t let crazy notions about democracy and doubting the growing American oligarchy get into their pretty, little heads.

Well, okay then. Perhaps that explains one of the more bizarre moments in the 2014 election cycle in North Carolina, where the weak grow strong and the strong grow great.

In response to their continued resentment and harping about the illegitimacy of student "carpetbaggers" and their electoral power, I presented the idea on "Watauga Conservative" that the party should prohibit/instruct ASU student republicans from voting. This would be a teaching example to the rest of the staff and student body(Democrats) that voting in local/regional/national elections is dangerous and undesirable. Also, it would insure their(republican) ideology remains pure and consistent.

Why would any voter registration group have to get the blessing of HPU Student republicans before getting to task?

This is outrageous. I'm sure this silly, rather full of herself woman will no blame all of those "socialist liberals" ...forgetting it was a conservative group trying to do the voter registration ...

Democratus Rex, that's my question as well - why would any group need the Young Republicans' permission? Why does she have that kind of power?