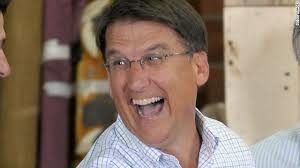 Hard on the heels of Republican candidate for the U.S. Senate Thom Tillis's flipflop on expanding Medicaid under Obamacare ... comes Governor Pat McCrory signaling that he's having second thoughts -- or maybe those are first thoughts -- it's hard to tell with this guy -- about previously helping to block Medicaid expansion in North Carolina.

Candidate Tillis earlier this year was proud as punch to campaign on blocking Medicaid expansion: "It's not happening in North Carolina, and it's because of Thom Tillis," one of his campaign ads bragged during last May's Republican primary.

Now he's had a death-bed conversion, watching his prospects of becoming a U.S. Senator wither on the vine.

Death-bed conversions on the matter of expanding Medicaid under Obamacare seem to be spreading faster than panic grass. So there was McCrory yesterday -- at a Raleigh country club, naturally -- signaling a similar change of heart. His disapproval ratings are probably beyond repair, but he's picking up that Obamacare trowel anyway, and we expect some major respackling of his uber-conservative credentials in the new year.

He'll still feel most comfortable at the country club, though.

Schofield is worth reading on this point: http://pulse.ncpolicywatch.org/2014/10/31/medicaid-expansion-real-conservative-bosses-still-offer-little-hope/