Watauga Vote-Suppressors Have a Lonely Week 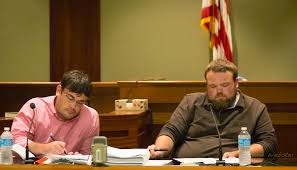 We listened in to the teleconference conducted by the State Board of Elections (SBOE) on Wednesday afternoon, the one when they voted 5-0 to place an Early Voting site in the Appalachian State University Student Union.

Not once during that short meeting did anyone say words like these: "What does the Watauga County Board of Elections want?" "Has anyone asked Chair Luke Eggers for his opinion?" "Does Bill Aceto agree with this?"

Eggers and Aceto were never mentioned, nor were their preferences either inquired about or catered to. Oh Chairman Eggers had certainly expressed an opinion, preferring sites as far removed from the Student Union as one can get without leaving the campus. But the Republican members of the SBOE were clearly done with seeking the opinion of the Two Amigos.

And why not? The Majority of Two on the Watauga County Board of Elections have implicated the SBOE in unconstitutional acts of voter disenfranchisement, have caused a legal shitstorm that may set precedents across the state for ballot access, have made it much more difficult for the SBOE to claim non-partisan reasoning for their administrative actions, have provided a consistent and debilitating series of scandals and unfortunate revelations since they took control in August of 2013.

Meanwhile, Republican Party Chair Anne Marie Yates still likes harassing student voters much more than trying to win their votes, so she was busying herself yesterday taking photographs of any student she saw in the Student Union wearing a candidate T-shirt, alleging illegal "electioneering" inside "the polling place," which under this present regime is the entire Student Union, a very large building of three floors where all sorts of activities go on all the time and where hundreds of students are buying coffee, gabbing, studying, and hanging out, and some of them -- gasp! -- may be wearing a candidate T-shirt or sporting a campaign button on a backpack, but otherwise doing nothing that fits the definition of "electioneering." But Anne Marie Yates filed an official complaint about it. She apparently wants to decree that any student wearing an offending T-shirt must disrobe before entering the Student Union.

Where was she when I voted yesterday morning? Because I must now confess that I was wearing two different candidate buttons when I went into the voting enclosure to do my duty, and I would have proudly posed for her camera. Because there's not one thing anyone on this green earth can do about a voter wearing whatever campaign swag he or she pleases when he or she goes to vote. And there's nothing wrong with a student wearing a candidate's button to the coffee shop.

Republicans just can't stop themselves from their divinely inspired primary purpose on earth: blocking other people from exercising their rights.

This needs front paging in the Appalachian newspaper.

Students don't matter
students shouldn't vote
students don't live here
students can not campaign
We are are Republicans and we do not support the constitutional rights of students in any way especially students right to vote.

@Anonymous. But they don't mind sending them off to die for *their* right to vote!

I wore my Billy T-shirt under a hoodie (not zipped up) and have always done so. There is no rule against attire while voting; never has been. She is intimidating voters and that IS illegal as far as I know. Someone should film her.

the only part of the constitution they care about is tne 2nd amendment, and they forget the portion of that which says "well regulated".

People showing up to video tape anybody at the polls need to get a life. Democrats or Republicans.