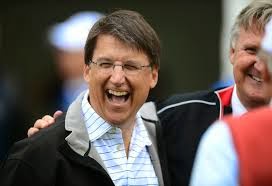 Pat McCrory signed the new Republican budget yesterday in Raleigh. You can look at the photograph of the signing in the Raleigh News&Observer. Four white men stand behind him. One of them is Art Pope, who just resigned as Budget Director but who is evidently proud to own this particular budget.

James at BlueNC points out that of the 68 House members and the 33 NC Senators who voted for this budget revision, only two of them showed up for the signing and one of those two isn't even running for reelection.

Leaving The Guv pretty much by himself in being proud of that mound of hash.

Just now seeing that Gary Pearce also took note of the curious lack of lawmakers at the signing (http://www.talkingaboutpolitics.com/Home/tabid/36/ctl/ArticleView/mid/364/articleId/4111/A-Picture-Worth-a-Thousand-Words.aspx), and WRAL has the better photograph.