McCrory and the Smell Test. Hint: He Doesn't Pass It 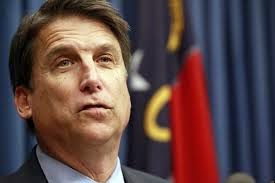 On April 15 of this year, Governor Pat McCrory filed a financial disclosure statement with the NC Ethics Commission, as required by law. In it, he claimed to own no -- zero -- Duke Energy stock as of December 31, 2013.

In May, Gov. McCrory filed a supplemental financial disclosure statement in which he continued to maintain that he had owned no Duke stock in 2013.

It comes to light this morning that indeed he didn't own any Duke stock by April, or by May of 2014, because he had sold it all shortly after the big Duke ash spill on the Dan River, which happened on February 9. His lawyer is now saying he sold his Duke holdings some time between February 14 and April 15. The lawyer is also not saying how much that stock was worth, but it has to have been worth at least $10,000 to fall under disclosure rules, and clearly the holdings did fall under disclosure rules.

The governor has found a patsy to take the fall for this cover-up: Bob Stephens, McCrory’s general counsel. He's taking the blame. He was "confused," he says in a prepared statement.

McCrory twice signed statements that claimed he owned no Duke Energy stock as of December 31, 2013, immediately following his quick divestment of that stock on the heels of one of the worst ash spills in the country. No, he wouldn't have known a thing about that! Because Mr. McCrory generally doesn't know anything about anything.

Thank Gawd we have a governor who is so totally out to lunch.