Thom Tillis: Moving Back to the Center Is Gonna Be Mighty Hard 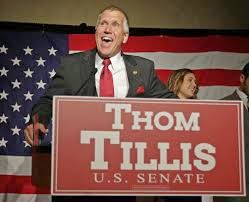 The thing about losing Republican Senate candidate Greg Brannon was that he'd never run for nor held any elective office.

The thing about winning Republican Senate candidate Thom Tillis is that he has and therefore owns a nice, big, juicy public record to prove how far to the right he's been.

The current public approval rating for the NC General Assembly is somewhere around 26%, and Thom Tillis as Speaker of the NC House can be justifiably cited as the author of that dismal dislike by the general public.

"Under Tillis, the GOP passed a constitutional ban on gay marriage, a repeal of the estate tax, laws mandating a photo ID for voting, new abortion restrictions, funding for vouchers and charter schools, looser restrictions for fracking and even cuts to unemployment insurance. Republicans have also declined to take the Obamacare Medicaid expansion and refused to set up a state exchange for the Affordable Care Act. It was a Republican dream." (John D. Nichols)

That's just for starters. Tillis actually recorded a radio ad that bragged that he had rejected health care for some 500,000 poor North Carolinians who might otherwise have been covered by Medicaid:

Now Thom's gonna have to answer for that and for a lot more. His difficulties getting away from that record were deliciously highlighted by this video, which was actually shot at Tillis's victory party last Tuesday night.

Posted by J.W. Williamson at 5/10/2014 09:43:00 AM
Email ThisBlogThis!Share to TwitterShare to FacebookShare to Pinterest
Labels: Thom Tillis

I wonder if there are any moderate Republicans or moderate Independents who could actually vote for him. . .