Citizens Seek a Meeting with Thom Tillis, End Up in Jail Instead 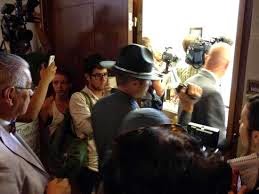 Some 14 people were arrested in NC House Speaker Thom Tillis's office about 1:30 a.m. this morning. They had been in the office since mid-day yesterday, requesting a meeting with the Speaker to discuss his legislative decisions and vowing to sit in his office until he granted them that meeting.

Why did the Speaker wait until after midnight to have them arrested? Because he dreaded the "optics" of having citizens hauled off to jail while he's in a race for the U.S. Senate?

He could have avoided it by simply meeting with the people, but Tillis doesn't meet with people. He meets with donors, preferably the big ones.

Posted by J.W. Williamson at 5/28/2014 08:10:00 AM
Email ThisBlogThis!Share to TwitterShare to FacebookShare to Pinterest
Labels: Thom Tillis

Did they schedule a meeting or just showed up and demanded a meeting?

Could I just show up to the White House, camp out in the Oval Office, and demand a meeting with the President to "discuss": IRS Targeting, NSA spying, VA Deaths, Benghazi coverup, ObamaCare lies, etc....

So we're supposed to regard Tillis as the equivalent in North Carolina of the POTUS? We know that Tillis certainly thinks very highly of himself, but that's going a little further than I think he deserves. I've been in the legislative bldg during "lobbying days," and people constantly just walk into offices and request a meeting. And generally, they get it. But not in Mr. Tillis case.