Preemptive Strafing of the Right to Protest in Raleigh

In the United States, as the Supreme Court has instructed us, money is speech, and that's certainly been true in North Carolina, especially since Art Pope seized control of the government.

In North Carolina, however, speech is not necessarily free, especially if you're trying to speak through the Moral Monday protests, which will crank up again this coming Monday at the Legislative Building in Raleigh. 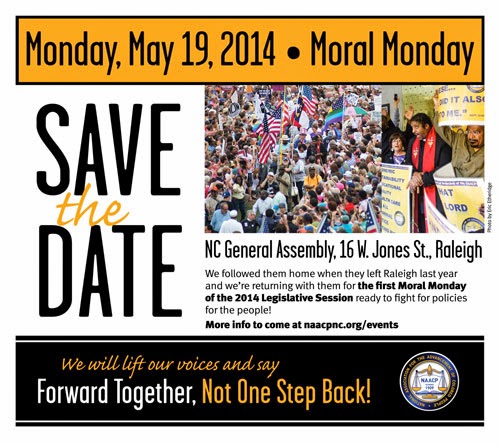 Nothing has riled our betters in the General Assembly like thousands of citizens demanding justice, fairness, and logic in the way our government is operated. So yesterday and essentially in secret, an obscure "commission" voted to change the rules on how you can get your ass arrested for protesting at the Legislative Building in Raleigh.

Of greatest concern is the vagueness of undefined terms used in the new rules, and the discretion given to Capitol police (who dangle on Speaker Thom Tillis's strings anyway -- let's be honest) to decide on their own definitions. The new rules prohibit acting in a manner that would “imminently disturb” the General Assembly.

"Disturb"? Some of the Honorables are deeply disturbed at the very thought that there are people who actually disagree with their agenda. So the sight of them alone might excite a good case of the vapors. Republican Senator Thom Goolsby was so disturbed that he generously labeled them "Monday Morons."

Starting next Monday, we'll see how Mr. Tillis and his drones define the new language.

They must not sing, chant, or clap their hands too loudly because that might disturb a sensitive Republican in the legislature. Sh-h-h-h!

Obvious disregard of the First Amendment. Republicans only believe in speech when it's them talking. Same as how they used to rail for "local control" until they took over the state legislature. Now, they are trying to preempt all local power. Yet the local money will stand with them because they want government for the businesses and by the businesses. People are not even on the radar except those making the big money at the expense of the environment and the rest of us.

Do you know what disturbs me? The idea that people bring guns into bars, and onto college campuses and into city parks. The 2nd amendment is fully defended by those in Raleigh - in ways that are absurd and dangerous. WHY DOES ANYONE NEED A GUN IN A BAR?

The 1st amendment right to freely assemble is trampled by those in Raleigh. Let us never "disturb" those august legislators as they work to destroy the state of North Carolina.

Any idea where most of the "protesters" will be bussed in from this year? I seem to recall a sizable number of the Moral Monday crowd being from other states...union members playing the role of NC citizens.

I see nothing wrong with the NC Legislature asking out-of-town visitors to behave themselves when touring the Legislative building.

Anon 9:07- how many North Carolina residents must be present in order for you to defend the right to protest?

Not that there's any 432463truth to your comment but the funding of the Plutocracy take over of NC is coming from outside NC with the exception of Art Pope's money or at least he's their agent here in NC. This right wing extremism is not just in NC but we're on the front lines of their assault of a free society.

Cearly you have not read the reporting on these rules changes - no one is being kept from protesting - the ACLU even agree there had been some "improvements" to the rules Yes, the ACLU did mention some concerns, but everyone is still free to protest (bussed in agitator or NC citizen).

I defend anyone's right to protest, in fact I've done a bit of protesting myself back in the day, but there is a difference between protesting and attempting to drown out the voices of elected officials conducting state business.

The Senate Majoirty PAC has spent millions in NC to prop-up Kay Hagan. In fact, Mr. Reid's PAC has spent more "outside" money on Hagan's race then any other Senate race in the country.

You don't like Citizens United, fine. But don't run around acting like Republicans are the only ones benefiting from big money donors.