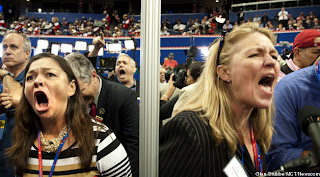 Not only did it collape, they got their cult worshiping political ass handed to them. What most of them don't realize is that Paul was the blocking back on the right for Romney that gave Romney the Title as the Mormon Freak Dude in charge after Paul pissing away 50 million dollars of [OPM}other peoples money way to set a new and amazing record of 44 dollar per vote in a Presidential Primary...Paul would have been fired as a CEO of a company that piss away the company assets in the wrong market with the wrong message to the wrong party..