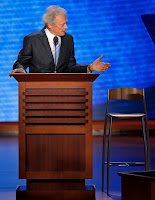 When I heard that Clint Eastwood would make a surprise appearance last night, I flashed on his statement last fall about gay marriage and thought that maybe a Republican spokesman was about to go off the reservation. He went off the reservation all right, but in a sad, sad way. Also ... in a wholly revelatory way, when you think about it: The Republican "fantasy Obama" has finally commandeered their brains.

What Clint Eastwood said about gay marriage (in an interview with GQ magazine, Oct. 2011):

That Clint Eastwood would have been a breath of fresh air in fetid Tampa.

Posted by J.W. Williamson at 8/31/2012 09:42:00 AM
Email ThisBlogThis!Share to TwitterShare to FacebookShare to Pinterest
Labels: Barack Obama, gay marriage

I take issue with any Hollywood actor whether Democrat or Republican spouting off about their Presidential candidate. They think their voice is so powerful when it comes to the end of the day they are just like the rest of us.

I was watching Mayo Angelou on something the other day talking about her President Obama. The interesting thing is that she is one of the most racist people in the world, but how so many people put confidence in her shallow words. She will be speaking at ASU during the MLK festivities. Of all people, what a laugh.

I was not that impressed with Clint Eastwood nor any celebrity that tries to push their weight. Curious to see who we will see at the DNC next week. I was more impressed with Senator Rubio from Florida. Like it or not, that man will be going places.

It is the Democratic Party.

For the most part I agree with you about Hollywood actors getting into politics... then again, Ronald Reagan is the prime example of that crossover and I think it's fair to say a lot of people think he did a decent job as president!

I'm genuinely curious as to why you call Maya Angelou "one of the most racist people in the world". Given that she worked with MLK and was a coordinator for his Southern Christian Leadership Conference, it seems very appropriate for her to speak at a celebration of King's life and accomplishments. Can you share why you believe she is so racist?

Maya Angelou is racist because she does not like white people. She has obviously made that clear to the citizens of Winston-Salem with her comments regarding Trevon Martin, coming under fire by the people of Winston-Salem. MLK was a believer in equality for all in which I wholeheartedly agree. Anyone who spews such hatred and anger as her sadly is a racist.

I cannot find any corroboration of your claim that Maya Angelou made racist remarks directed at white people in connection with the Trayvon Martin case. In fact, when I searched for stories about Angelou in the W-S Journal I found headlines like these:

You know, I'm just not seeing the "hatred and anger" spewing forth there. I also discovered in reading a little more about Angelou that her second husband, who she is still friends with, is white. The more I read, the more impressed I became with Angelou and all she has accomplished, and the less plausible your claims of racism became. Kudos to ASU for bringing her here!!