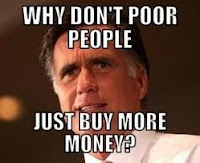 Senator "Bank-Run" Burr, who sent his wife to the ATM back in 2008 to take out as much cash as possible before the general public found out what was about to happen to the nation's financial system, sez that Mitt Romney has "probably" paid taxes according to "the letter of the law."

That, of course, is precisely the problem, that by "the letter of the law" gazillionaires have everything rigged for their benefit, thanks to senators like Dick Burr. But no matter.

Bank-Run Burr sez that if he were Mitt Romney, he wouldn't release any more tax records.

Yeah. We get that.

Birds of a feather could not be any flockier.

Posted by J.W. Williamson at 8/04/2012 11:08:00 AM
Email ThisBlogThis!Share to TwitterShare to FacebookShare to Pinterest
Labels: Mitt Romney, Richard Burr