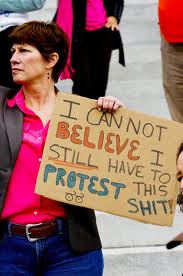 Republicans who oppose abortion under all circumstances -- which is most of them, at least the ones running for office -- go to great lengths to justify their intellectual position that women are breeding stock and have no rights over when and if they give birth. Which is why Republican senatorial candidate Todd Akin of Missouri relieved himself publicly of this opinion: "If it's a legitimate rape, the female body has ways to try to shut that whole thing [pregnancy] down."

He opposes abortion under all circumstances, so he apparently needs to believe that a woman who's preggers from rape wasn't really raped at all. She must have consented, else those magical secretions every woman is capable of would have fried that sperm in mid-swim.

Turns out that this is a perennial myth touted by some Republican men (and some Republican women, eh, Virginia Foxx?). Robert Mackey has written a handy primer on the recent history of "God's little shield," which includes one dentist from North Carolina, Henry Aldridge, a Republican member of the NC General Assembly at the time he claimed this: “The facts show that people who are raped — who are truly raped — the juices don’t flow, the body functions don’t work and they don’t get pregnant.”

"Legitimate rape," "true rape," "forcible rape" (which is what Mr. Akin eventually said he meant) ... what gives here? The parsing of words is necessary for the stupidity to work. If the myth sez "real" rape can't result in pregnancy, then women who say they're pregnant from rape are fudging the truth, and therefore, O my brethren, the Republicans in the U.S House (including the ineffable Virginia Foxx) felt fully justified in 2011 in the "No Taxpayer Funding for Abortion Act" to redefine the rape exception in federal anti-abortion law as applying only to "forcible rape." This law kicked up a hell of a fight in Congress and did not ultimately pass, though Mr. Akin, along with Paul Ryan and Virginia Foxx, voted for it.

Because they believe that shit.

I used to consider myself somewhere in the center politically. But today's Republican party has abandoned knowledge and science and embraced ignorance and quackery, and I cannot respect candidates who are either willfully ignorant themselves or who tolerate it in their party. At least some Republicans are speaking out against Akin. Good for them. If only they would also be vocal about other areas in which their party ignores and even suppresses science (sea-level rise in NC, anyone?)

I believe this is the first Anon comment I have read here that shows they are capable of careful thought and rational consideration. Thanks, Anon 7:27, for restoring my faith in A-nonny-mooses. And you are so correct about the sea-level rise stupidity here in NC. As for abortion, the problem is, the GOPers who are speaking out against Akin don't really mean it. Just watch how quickly and unanimously the entire party will adopt the platform in Tampa next week. Probably the vote won't make prime time coverage, of course, they would rather not call TOO much more attention to the platform's demand for a Constitutional amendment giving personhood status to the fetus and denying abortion for any reason. Period. But that's what it will say. Those women who supposedly (like The Madam) are swimming in Ryan's baby blues and loving his buff bod better think about the consequences of electing this ticket.

Nice comments, wooduck. You cannot do anything but make personal attacks because you have no logic. Does your mother approve of you?

A 5:54: Can it be a "personal attack" if you don't think of them as human persons? Not sure that's a logical comeback you have made. And since about the 5th grade I have grown out of saying things that reflect on people's mothers, very juvenile way of expressing oneself. I don't necessarily agree with wooduck-- I don't even know what a teaslagger is. Then again, I don't know what a libtard is, either. Strange, inhuman terms are being bandied about this election cycle. Politics ain't beanbag, but in theory it reflects (in a democracy) the will of the majority and requires the cooperation of both sides to keep the public peace. Namecalling doesn't help the civitas.

brotherdoc the tone of your post seems to make you out as such a nice guy who doesn't call names. Then why was it just a couple days ago i was called a parasite by you for claiming i was self reliant and extolled the virtue of success through hard work ?

You also still have not answered me at what level of financial success do i need to be forced to pay more in civic responsibility ?

You may have a point, brotherdoc.

Wooduck and others such as those that did not believe Jews were human and fostered the "final solution" may not be entitled to use the same vocabulary as the rest of us.

It is strange you take exception to my use of "mother". Don't you think a mother could have an opinion, even a negative one, in this case? My mother would have slapped my ears around to the other side of my head if I behaved like wooduck. I believe you were over indoctrinated with political correctness in the fifth grade or before.

Opoib, I have never used the term parasite in any post, I don't believe. That's a dehumanizing word and it's a slippery slope when anyone calls a person or a group of people parasites. In Mein Kampf you-know-who called Jews bacilli and so on, people thought, oh well, he's just exaggerating, but turned out he meant it and had a plan for exterminating them.
As for your other recent request, I think you were responded to adequately by others in that discussion thread. If you think the point of taxes is to penalize a person for hard work then it's you that have an attitude problem, it's not the fault of the tax code, which while it has many many flaws defended by Congressmembers of both parties, taxes are as Ben Franklin said, inevitable. Taxation is the price of living in a community. Which gets us back to Ayn Rand and her "objectivist" absurdities that was the topic of Jerry's original post.

"No man is an island,
Entire of itself.
Each is a piece of the continent,
A part of the main.
If a clod be washed away by the sea,
Europe is the less.
As well as if a promontory were.
As well as if a manor of thine own
Or of thine friend's were.
Each man's death diminishes me,
For I am involved in mankind.
Therefore, send not to know
For whom the bell tolls,
It tolls for thee."
John Donne

Brotherdoc, I owe you an apology. It was not you it was Brushfire who called me a parasite i looked it up. I do disagree with you saying the government made my business profitable.

I use the same taxpayer made infrastructure that every person has a right to so I am not more government built then you. My point is no one did the work to make me profitable besides my self.

The left is trying to make it look like like if the government does not call you up and say your on the special list then you can not succeed that's baloney.

I had no more special perks then you have available to you. I built my company not the right, not the left, not the independents, I did the work I should have the spoils of my success.

As to your statement on taxes I pay to the penny what I have to by threat of imprisonment, not a cent more. And those taxes help pay for the same infrastructure that was and is available to you and me. Public schools, roads, and so on the same as they are to you.

Now if you would be so kind I would still very much like for you to put a # on the amount of that success I can have, before I should be mandated by threat of jail to give money away as a civic responsibility