Someone Should Ask Virginia Foxx 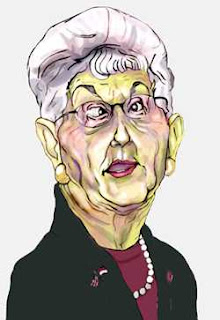 Madam Foxx will be speaking to the Yadkinville Rotary Club on the morning of August 24th. Some of those good people in the business community of Yadkin County might ask her why she was one of only 32 members of the House of Representatives to vote against H.R. 3854 ("Small Business Financing and Investment Act of 2009"), legislation designed to help small businesses obtain federal micro-loans, government contracts and export assistance. At the bill's center is a $30 billion program for community banks to extend loans to small businesses, since the Big Banks aren't doing it. The N.C. Bankers Assn., that notorious nest of socialists, supports the bill.

It passed the House last October, with Foxx voting NO. It's now stuck in the Senate, where Sen. Dick Burr and the rest of the Republicans are acting like the total dicks they are.

Other provisions in the law would increase amounts of Small Business Administration loans, leverage $1 billion in export capital, offer tax breaks for investments and startup costs, and give temporary funding for rural exports.

These are all things that would help small businesses in North Carolina, where the unemployment rates are still over 10 percent. But Foxx is much more interested in seeing small business turn to dust for the sake of partisanship.

It's virtually guaranteed that no one at the Rotary Club meeting in Yadkinville later this month will (1) know anything about her actual voting record or (2) get their puckered lips off the Madam's dainty ass long enough to challenge her abyssmal record.
Posted by J.W. Williamson at 8/06/2010 08:09:00 AM
Email ThisBlogThis!Share to TwitterShare to FacebookShare to Pinterest
Labels: unemployment in North Carolina, Virginia Foxx, Yadkin County