Kissell, Shuler, and McIntyre Get a Warm Reception 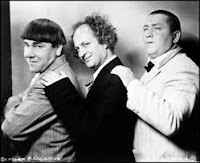 The main action yesterday at the state Democratic convention in Fayetteville -- or at least the most interesting -- swirled around a resolution put forward on the convention floor "to condemn" U.S. Reps. Mike McIntyre of Lumberton, Larry Kissell of Biscoe, and Heath Shuler of Haywood County "for their votes against health care reform."

The leadership of the state party were apparently fit to be tied.

Following heated debate, the resolution got watered down to asking the three congressmen to please please please don't vote with the Republicans in the future to repeal the health care reform. Andrew Whalen, the executive director of the state party, put on his best game face: "I think the fact that the resolution was amended and then passed shows the party is to work together to get Democrats elected. It demonstrates we are the big-tent party...." Blah, blah, blah.

Wish we had us a few Anthony Weiners in North Carolina ... instead of what we have.
Posted by J.W. Williamson at 8/01/2010 09:05:00 AM
Email ThisBlogThis!Share to TwitterShare to FacebookShare to Pinterest
Labels: Heath Shuler, Larry Kissell, Mike McIntyre, North Carolina Democratic Party

your link to the hon. speech was the best preachin' i've heard in a while! thanks!

Thanks for posting the Anthony Weiner link. I could not do this yesterday, and I think it is important to see how a real Rep. speaks and votes. Sigh...

I proposed the amendment removing the condemnation language. I ran for Congress in the Tenth District in 2008 and have actually thought about the responsibilities of a congress person to self, constituents and party. No one in the party leadership urged me to propose that amendment or had any pre-knowledge that I might. If any Democrat should be condemed about health care it is Senator Max Baucus. I am 100% for single payer. I am also 100% in support of Billy Kennedy who gave a great speech to the convention. Steve Ivester - Hickory

Welcome to the blog. When you post, under all the word verification boxes, if you click on "Name/URL" and just put your desired nickname and leave the URL blank, the system will automatically put your name instead of "Anonymous". Cheers! :)