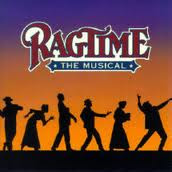 If you don't know this already, the Lees-McRae College Summer Theatre is one of our greatest cultural resources in these here mountains, a professional operation run by Janet Speer since the mid-1980s to the great delight and edification of anyone fortunate enough to see one of her genius productions.

We saw her mounting of "Ragtime" last night, which was quite the condensed history lesson of America in the first decades of the 20th century, told by a sterling cast with music supplied by a really hot combo of piano, clarinet, bassoon, violin, and percussion. It ain't your typical junior high history lesson, either, dealing frankly with race, immigration, class privilege, and radical labor organizing. Not many musicals give you both the socialist firebrand Emma Goldman and the racial accommodationist Booker T. Washington in the same cast of characters!

The production runs through Friday (for tickets, phone 828-898-8709). If you manage to grab tickets, get yourself there early, as there are no reserved seats. Last night, it was pretty much standing room only in that auditorium.

The Summer Theatre usually runs three (and occasionally four) shows every summer, but this year "Ragtime" is the only production. A sign of these economic times. Lees-McRae College appears unable to subsidize the theater this year as in years past, and next summer's schedule depends entirely on how well "Ragtime" does this week.

It would be a pluperfect shame to lose this bright and shining resource.
Posted by J.W. Williamson at 8/03/2010 09:41:00 AM
Email ThisBlogThis!Share to TwitterShare to FacebookShare to Pinterest
Labels: Lees-McRae College

I'm sorry to disagree with you, JW, but I must.

"Ragtime" is a great musical. I have seen this production in NYC and elsewhere. It's story, music and message are superb! Everything I have ever heard about Dr. Spears is wonderful; her grads speak so highly of her and do love her.

But I must say that Spears' productions, of which I have seen many, leave a lot to be desired. Her staging is simplistic and somewhat trite. Her comic moments are all delivered downstage center and directly to the audience, often by bad actors. Her casting of comic actors is terrible, and she does not know how to tell them when enough is enough. Her dramatic moments are almost always delivered downstage center and often delivered directly to the audience. In short, she does not know how to use the space directors have of a stage.

In musicals, her soloists moments are often distracted by extraneous movement in the background. Her duets, are also staged with distracting dancers in the background. And all are staged downstage center - time after time after time. She cannot create an emotionally intimate moment and have it delivered simply and clearly to the audience. Her casting is often stereotypic and she takes no artistc chances. I realize that she is using collge students, but even college students can be better trained.

I'm glad you enjoyed the production, really, and I hope I am wrong about "Ragtime." It would be a pleasant surprise. I know L-M offers nicely selected theatre experiences, and hires other directors with much talent. And it is clearly superior to the "professional" theatre of Blowing Rock, mismanaged, driven into the ground and now somewhat defunct of Blowing Rock.

We prefer the Ashe Co. Little Theatre, the Barter Theatre of Virginia (both stages,) the Black Theatre Festival of Winston-Salem (ANY production produced biannually,) and the touring productions at the Belk Performing Arts Center in Charlotte.

But for the time being wife and I have sworn off Spears' productions.

But for the time being wife and I have sworn off Spears' productions.

I am sure that makes Spears happy. If someone does not enjoy going to a performance, their negative behavior lessens the enjoyment of everyone else. Thank you for having the decency to stay away.

How childish is your post(like it supposed to be intelligent but had the opposite effect.) I gave lucid, valid, and well-supported criticisms of her work. I have never shared them with Spears, nor have I ever displayed "negative behavior." This was simply negative CRITICISM. I can understand your being upset, as I'm sure you have been the target of much negative criticism.

However, as an intelligent and well-informed playgoer, I am entitled to my opinions.

In addition, as any performer knows, your performance is always subject to evaluation. Be it fine art, or music, or theatre, or film or even television (probably as close to performance art as you get,) the artist is always going to be critiqued. The trick is to have founded, criticisms, and not just say, "This sucked!"

My God, man! Haven't you ever heard of a production, an actor, or even a designer or director getting a bad review? Put down the comics and try reading the Entertainment section of the Sunday New York Times next week.

Come on and admit it: you must have seen an episode of "Futurama" and said, " Boy. I do hope next week is better. I want more Bender! This week sucked!"

You actually wrote that review?!? I thought you copied and pasted it from a professional review journal!

Haha! Just kidding! I found your review detailed and enlightening. I have not seen a Spears production, and based on your review, I think I will stop instead at Nick's and do a little karaoke, rather than heading into B.E. for the show.

I am a big fan of the Ashe County Little Theatre and have seen numerous shows there. I would love to see a Barter Theatre show sometime, but as we all know, I have not had a car for a long time. Take me with you sometime, and we'll raise hell!

Now, if you would only consider being so deeply philosophical in your political posts...

Mike:
Thanks. But do you REALLY want to be stuck in a car with me for a trip all the way to Virginia and MAYBE back? You ARE asking for trouble! But I'd be happy to take you, just the same.

PS: DO support the L-M Theatre. I just advise you to find out who the director is, first.