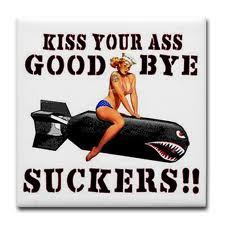 A little YouTube to cheer you up on a rainy Thursday.

Appropriate, actually, on the day after Fox News owner Rupert Murdoch announced he was giving $1 million to the Republican Party (well, actually the Republican Governors Association. But whatever). That tiny corporate donation was only the natural honey-chile of The Supremes decision in Citizens United v. FEC which promised to escalate the corporate domination of every American brain cell not already permanently addled by reality TV.

As important as Fox News is already -- the official-unofficial propaganda arm of the GOP -- this is only the tip of a menacing block of floating ice that will sink any ship it brushes. The Republican Governors Assn. had already collected $1.48 million from the Michigan Chamber of Commerce and another $1 million from the head of Koch Industries, a huge chemical conglomerate headquartered in Wichita, Kan.

I will not be able to applaud when Democrats start mining the same veins of corporate ore. I'll understand why, but I won't applaud it.

Obviously since you are virulently opposed to any other viewpoint that you don't agree with, you only share the part of the story that supports your hatred of Fox news. Of course, before this contribution, Murdoch company contributions had been over 50% for democrats and less than 50% for republicans.

Of course, I guess MSNBC and CNN are objective and talk only in facts and truth? This is one of the biggest lies being put forth by you leftist. You don't say it here, but it is certainly implied. If Fox leans to the right, at least it counters the half-truths and hatred being spewed the leftist media, which is most media.

I guess you and Jon Stewart from The Daily Show have that in common - you only like to share facts to the point that it suits you, and not the whole story.

Don't really know why I bothered to write this since it will probably not be published on the site since it disagrees with your leftist small mindedness.

So as of today, 25% of Americans STILL believe Pres. Obama is NOT a citizen of the U.S.A. Ridiculous!

And why is that?

Maybe because he refuses to simply release his birth certificate.

BB - once again you say absolutely nothing in your comment. It's obvious you are reaching, because your comment is not even related - and of course, you provide no proof. Again.

"There are none so blind, as those who WILL not see." - idiom

BB - you write words, but nothing. Empty intellect I guess. Or just empty.

"Wisdom and goodness to the vile, seem vile; filths savour but themselves." - W.S.

Thank your for the quote, Bard. It explains you very well.

"I'm rubber, you're glue.
Everything you say,
Bounces off me and sticks to you!"
- Anonymous, the "Great Debator"