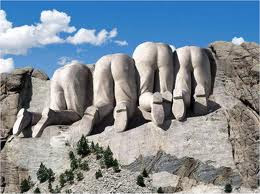 At his press conference yesterday afternoon, Watauga County Commission Chair Jim Deal named some prominent local Republicans who agree with him about the wisdom of passing the referendum to raise local sales taxes by 1/4th of a penny: Joe Miller, Dale Greene, Rob Holton, Kenneth Wilcox.

In this current context of Tea Party extremism, that mention by Jim Deal suddenly redefined those gentlemen as "moderate" Republicans. Believing that one of the noble activities of government is to increase the public's ownership of infrastructure which enhances the lives of the people through education and recreation has become official heresy to the Watauga GOP. So we guess that as of approximately 4:45 p.m. yesterday afternoon, Miller, Greene, Holton, and Wilcox are now officially heretics.

Men like Miller, Greene, Holton, and Wilcox don't run the local Republican Party. The people currently running it owe their allegiance to the kind-hearted philosophy of Virginia Foxx, though they appear to be taking their actual local marching orders from tea partiers and from one government-hater in particular. All the energy roused up against the 1/4th of a penny hike in sales taxes is due to the organizing and agitating talents of Deborah Greene, who for whatever reasons changed her party affiliation on March 22nd of this year from "Republican" to "Unaffiliated." It is somewhat paradoxical that the longest running Energizer bunny behind the local GOP is actually not now a registered Republican. (Oh right: the Tea Party "is not a partisan movement." Got it!)

The anti-tax forces also owe David Blust as a prime organizer, and he's very much a face of the local Republican Party (as well as the face of the local Tea Party -- so much for that non-partisan claim). Commission Chair Deal mentioned Blust's name twice yesterday during his press conference. It was Blust who essentially got tagged with the "misinformation, legitimate questions, wild rumors, and outright lies" that Mr. Deal said were being deliberately bandied about in an effort to sink any possibility of a county recreation center and an eastern community center in the Deep Gap area. Blust (for the record) also opposed and voted against the new high school when he had an opportunity to do something constructive for the citizens (and actual power as a County Commissioner in 2005 and 2006), and he was, incidentally, also deeply involved in the attempted Templeton takeover of the Boone Town Council in 2007.

In other words, Blust has quite the reactionary record to run on this year, as he tries to rewarm that seat on the County Commission. He thinks loud opposition to building the infrastructure of Watauga is his ticket back into office.

Mr. Deal spent a good deal of time yesterday correcting the misinformation, unfounded rumors, and outright lies of the David Blust/Deborah Greene anti-tax insurgency, and he did a clear and concise job of it. Not that half the audience was even listening. They were mentally preparing their own verbal rejoinders, accusations, and slogans to hurl back, and when Mr. Deal did not give them that formal opportunity, they shouted and stomped their feet anyway and cried that it wasn't fair that a press conference called by Mr. Deal did not include opportunities for them to proclaim their own reality.

It's good to see someone standing up to these people. What I'm reminded of, when I read their letters to the editor, or see their online postings--is of children. Children who have been--in this case--reprimanded by the voters (by not electing them or supporting their causes) and who are now lashing out. Their behavior really amounts to temper tantrums, as they lie--and lie again--to try and get their way. Sad, really. They're so angry.

"who for whatever reasons changed her party affiliation on March 22nd of this year from "Republican" to "Unaffiliated."

I seem to remember certain Watauga citizens being very upset with other politicians not allowing their audience the opportunity to ask questions or comment.

JW, aren't you being a bit hypocritical?

Why should I pay anything for someone else's recreation?

Deal is part of a ruling click who like to force the people at large to pay for the benefit of his favored few.

Is it mere coincidence that Rodger Clements is indited for LYING to to congress, and his main supporter was our own Virginia Foxx? Got more pictures, Ginny?

I notice that JW faults Foxx CONSTANTLY for not holding Town Halls so he can harangue and foam at the mouth over something, BUT if Deal holds a meeting and doesn't let the public speak or ask questions it's all right and proper.

For the record I am not a Tea Party member either. I am me and I owe no allegiance to any party and I like it that way. It is very refreshing. The day Hank Paulson and George Bush asked us to give $700 billion to the banks is the day I woke up. However, then Obama and Geitner did the same thing. And, what did I discern from this? Both parties are just as corrupt as the other. I will admit that I will always hold to the principals that the Republican Party once claimed as theirs. However, they are not holding to those principals and I have moved own.

No I am not sick and tired of David Blust. David is one of that still holds to the core principals. And, I look forward to David returning to the commissioners. I hope he has had enough of Chairman Deal dictatorship techniques. I had differences of opinions with Pat Wilkie and Sue Sweeting when they were commissioners; however, they never acted like Chairman Deal. And, I think this current board has been involved in corruption and fraud and have asked for an investigation into their activities. Regardless of my policy differences with Sue Sweeting and Pat Wilkie, I don't remember ever thinking their was corruption and fraud. I thought there were dirty tricks; however, that seems to come with the territory.

Another comment. In the email you circulated for Chairman Deal on behalf of the commissioners, Chairman Deal "outright lied": He said that David Blust voted against the private-public partnership between the county and the soccer association. Not so according to the December 5, 2005 minutes. Not only did David Blust vote for it; he made the motion that was seconded by Commissioner Kinsey.

Commissioner Blust, seconded by Commissioner Kinsey, moved to approve the concept of a public-private partnership for the purpose of designing, building, maintaining, and financing a state-of-the-art multi-purpose soccer complex and directed members of the Parks and Recreation Department and County Manager to begin discussion with representatives of the High Country Soccer Association Board for this purpose.

Chairman Deal loves to hear himself talk so much that he gets tangled up in his on web.

Hey, Deborah! It was good to see you the other day at the press conference. I think Deal should have taken questions as well.

I'm also madder than hell about the bank bailouts and attribute that sham to both parties. The fact is, I think we the people are never going to get anywhere until we are able to institute term limits, campaign finance reform (the real stuff, not the "pretty language, no substance" kind), and come together to out and stop corporate ownership of our government. I can't for the life of me understand why we all can't take a breather from just bitching back and forth at each other about everything from whether or not gay couples get married to Dems suck/Reps suck and agree to join together to move forward on these key issues that I would hope we could all agree on.

I'm sure you and I mostly likely disagree on health care reform for instance. I want government health care for all, you want public health care for none, but it really doesn't make much difference where or how we differ on this. As long as our politicians are bought and sold by the rich and powerful corporate insterests, you and I remain pawns for their pleasure.

Hey Deborah, it is PRINCIPLE, not PRINCIPAL, just saying!

Question for you though -- if you are not a Tea Party member and you think both major parties are corrupt, what are you?

MR, maybe you need a remedial reading class. Ms. Greene said she was herself.

"For the record I am not a Tea Party member either. I am me and I owe no allegiance to any party and I like it that way."

Pam. It looks like we can agree that too many of our elected officials are controlled. That control goes much deeper than many of us are capable of understanding. What I witnessed the day George Bush and Hank Paulson stepped up outside the side door of the White House and announced the $700 billion bailout forever changed the way I view things. I could see the nervous/sick look on their faces. The problem behind that move has not gone away. One side of me is fearful that things have gone on too long. They are getting bolder. The other side of me wants to hold hope out that the people will wake up. And, I agree, term limits and campaign reform must take place.