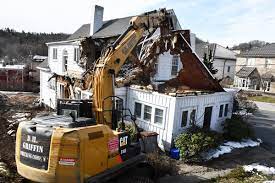 Rep. Ray Pickett introduced a "local bill" (H193, that the governor can't veto) which will exempt the development of the Oscar and Suma Hardin House property (a.k.a, the Turner House) in downtown Boone from following the rules in Boone's Unified Development Ordinance (UDO). The Watauga County Commish wants to build a parking deck for the Courthouse, and they don't want to be bothered with following rules that will include a public hearing. If you recall, they refused a public hearing before they demolished that historic house.

That Ray Pickett, who served on the Blowing Rock Town Council and who would not, we think, have screwed his own town with a bill like this, is apparently happy to screw Boone speaks to a political moral compass somewhat out of whack.

The Town's UDO development standards apply to everyone, whether a government, a major or minor devloper, or even a person wanting to build a storage shed. Why should the big, powerful players be exempt from the rules all the rest of us have to follow just because they have the means and power to get a special law introduced in Raleigh?

But we have other questions. Who on the County Commission approached Pickett to get this bill introduced? And what secret meetings went on behind the scenes that led the Commission -- without ever taking a public vote that we know of -- to take this underhanded path. Who met with whom and who was there? And why the need to operate under cover and in the dark of night without public input or knowledge? And what says the Boone Town Council about such a blatant and dangerous subverting of local control?

Posted by J.W. Williamson at 6/08/2022 07:26:00 AM
Email ThisBlogThis!Share to TwitterShare to FacebookShare to Pinterest
Labels: Ray Pickett, Town of Boone, Watauga County Commission

First of all, I was saddened to see the Turner House go, she was a real beauty. It should have been saved. Reminded me of the burning of the fine historic house where New Market was built. That was another tragedy.

But, sauce for the goose. The Town of Boone Fascists have run rough shod over property owners for years, and if someone wants to bulldoze the town for a giant four lane divided highway straight into Tennessee I just ask that they move any historic buildings and also bulldoze App State for good measure.

If the Commissioners wanted this, well, they're all democrats and you of all people should know that democrats can't be trusted or believed.

If the state and county use their power to do things you don't like in Boone, just as Boone uses its power to control the property owners, well, the old term for this is "Hoisted on your own Petard"

Thanks to Wolfhead for his or her comment, and it is extremely disappointing to me that so much legislation is being decided behind closed doors. I do try to keep up, but while I don't agree with every move made by our local officials, I don't see the Town Council members as operating in the dark at all. Their agendas are clearly stated for anyone who wants to find them, and their minutes are comprehensive. I support the Town's rules and regs and think they should actually be strenghened. I'm no cheerleader for everything they do, but they are certainly far from fascist.

It is distressing to me as a progressive that the County's actions are conducted too much behind closed doors.

What is revealing to me in this instance, though, is that progressives will call out other progressives when they think they're off track, as is the case with this blog. I don't see the same commitment to the truth and integrity by the conservatives at all. Wolfhead might consider taking some time to make that happen in his/her own ranks.

Speaking of calling people out. Why doesn’t J.W. take against against our Chairman of the County Commission who no longer lives in Watauga County yet refuses to vacate his commission seat. Chairman Welch took a new job with UVA in Charlottesville, VA in May. Since he doesn’t live here he needs to vacate the seat and let the other commissioners appoint his replacement.

Given that John's family is still here and he's home every weekend and for Commission meetings, this is still his home, and it's his legal residence under North Carolina election law.

I had an out of town job for 3 years, as do people in the military, but we all call(ed) this home and kept voting here....as legal residents.

After the town invested a lot of money designing what it thought was a joint project with the county to build a parking deck on Queen Street, the commissioners pulled the rug out from under the project with no explanation. They then hastily tore down the Hardin House, which was historically significant and architecturally attractive, to leave a scarred section of earth still on display. What do you expect from a commission which hired a.developer attorney, involved with theCottages and who represented developers against the town during his last stint as county attorney, costing the taxpayers in Boone a bucket of money. No wonder there is a strained relationship!

Responding to 'Isn't about party', Well, what conservatives?

Foxx? She should have left government a long time ago. Tillis? My friends call him Traitor Tillis. Burr? A total waste, he's done jack shit other than lick McConnell's ass for decades.

None of these are what I consider a 'conservative.'

As for strife between the town and the county? Good. Let the governments fight each other and leave the folks alone.

As I recall (so an explanation was given or I wouldn't have read about it), the Town Manager never got the geological testing (bore samples) his Town Council and the County Commission ordered him to get (it was a joint public meeting so the directive was given in public) to see if the Queen Street deck could even be built. Most of us wouldn't go halvsies on any project without knowing what it was going to cost and eveybody up here knows how much running into rock raises the cost of construction.

The town fascists? Seems like all the regulations in the world haven’t stopped anything. Out of state developers and locals alike, with the help of certain local lawyers, prey on the town and don’t shed a single tear as they destroy the quality of life here. They are apparently focused on making those bank deposits. Doesn’t seem like all the hoops they claim they have to jump through have done anything to stop them. Any of us who like living in this town are glad for the “fascist” regulations and wish there were more. The county commissioners care zero for the quality of life for the people who actually live here, and our elected representatives in Raleigh even less. Somebody needs to try.

The liberal hypocrisy is rich. There was a time when the current Boone Mayor, Tim Futtrelle, a Democrat, moved out of his commission district but stayed in Watauga County and there wasn't a peep out of the media or this blog. Then Nathan Miller, a Republican, moved out of his district but still in Watauga County and the coverage was on all the county media and this website. To help your memories please see this link: https://blog.wataugawatch.net/2013/05/is-nathan-miller-legally-serving-on.html

Now John Welch moves 4 1/2 hours away and still says he "lives here." The same Democrats who were livid that Nathan Miller moved to a neighboring district in Watauga County, see no problem at all with John Welch living in Virginia but continuing on the County Commission.

Good for John Welch, bettering himself and his family. He needs to do the right thing and resign his position as he no longer resides here. Democrats could do themselves a favor and call this for what it is, instead of trying to make excuses for him just to try to cling to power. Heck the Democrat commissioners get to appoint whoever they want anyway.