Burr and Tillis Part of the New Gun Control Agreement 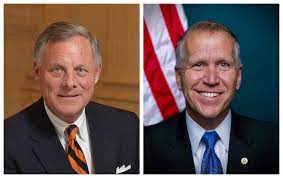 What does lame duck Richard Burr have to lose, signing on to the proposed framework for new gun control legislation in the Senate? Sen. Thom Tillis has also been one of the 10 Republicans working with 10 Democrats to craft a bill in response to the Uvalde massacre. The agreed framework -- there is no bill text yet -- would focus on more extensive background checks on people under the age of 21. It's not a ban on the under-21s buying assault weapons.

Still a risky move for Tillis.

Perhaps the most consequential provision in the proposed bill would be this one:

Require that convicted domestic violence abusers and those subject to domestic violence restraining orders are included in background checks, including “those who have or have had a continuing relationship of a romantic or intimate nature.”

Posted by J.W. Williamson at 6/14/2022 08:10:00 AM
Email ThisBlogThis!Share to TwitterShare to FacebookShare to Pinterest
Labels: Richard Burr, Thom Tillis

Abused women are 5 times more likely to be killed by their abuser, if the abuser has access to a gun. The boyfriend loophole allows abusers to readily access guns. Women are just as likely to be killed by dating partners as by spouses. This was a loophole left out of VAWA to satisfy the 2nd Amendment supporters like Virginia Foxx.