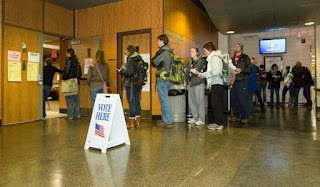 With pundits and polls predicting relentlessly that Republicans are cruising to major wins this November, taking back power where they've lost it and consolidating power where they already hold it (like in North Carolina), I'm if anything bewildered, as in its original meaning of being stranded in a wilderness with no map out.

Why? Why would voters want more Republicans? In positions of great authority, where they can tell you you're going to breed whether you want to or not? Or simply decree ("just fine 364 more votes") that the votes of certain people don't count, so their side wins -- always, in perpetuity, to the ending of time itself? Or unleash local governments, businesses, and individuals to harass queer people because to bully is next to godliness.

When they buy themselves a Supreme Court majority through their Trump tool, and that majority intends to impose ideology on the law?

They intend to force election outcomes into their column, and they'll stop at nothing. A con man is their god.

Who wants more of that?

Pardon me, but putting them in control is deranged.

Posted by J.W. Williamson at 5/26/2022 08:05:00 AM
Email ThisBlogThis!Share to TwitterShare to FacebookShare to Pinterest
Labels: early voting in Watauga County

""In positions of great authority, where they can tell you you're going to breed whether you want to or not?"

SO, you think the repubs will force people to 'breed'?

Seems the problem is with folks 'breeding' by their own decisions and then refusing to take precautions or responsibility for their actions.

And before your panties get any higher up your crack, I'm not referring to forced sex such as rape or incest, but really, how many cases of these are there? I haven't seen any stats on how many abortions are done because of rape or incest, although I am sure you or your readers will inform me in the comments.