Virginia Foxx's Statement on the Alito Opinion Striking Down Roe

I was just reading reporting by Jonathan Weisman about how congressional Republicans, who've spent decades spitting mad about Roe v. Wade, have suddenly gone very quiet about the leaked Samuel Alito decision to overturn Roe -- partly at least "to avoid a backlash against their party ahead of the midterm elections." 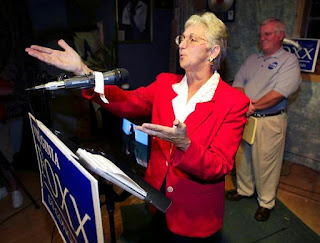 Hmmm, sez I, wonder what Madam Virginia Foxx is saying, so I went and looked, and what I saw is truly a remarkable performance of avoidance and misdirection.

I have long held that the truth about abortion and the deceitfulness of Roe would be inevitably revealed to the American people. Until that day comes, I will never yield in my mission of exposing that truth.

What? What the hell is she talking about? "The deceitfulness of Roe"?

Former Supreme Court Justice William Rehnquist once observed that, ‘The Constitution protects judicial independence not to benefit judges, but to promote the rule of law.’ That sentiment rings true to this day even as both the independent judiciary and the Constitution have been subjugated by the actions of a rogue, partisan actor. The Founders foretold of this threat, and they were right.

She's clearly not interested in actually addressing the content of Alito's opinion, so she quotes an odd nugget from William Rehnquist which is apropos of nothing at hand. And who's the "rogue, partisan actor" who has "subjugated" (subjugated? Really?) "both the independent judiciary and the Constitution." What the fuck? This is like reading something badly translated from the Russian politburo.

The final paragraph makes clear she's not interested in talking about the content of Alito's opinion but about the person who leaked it:

The political predilections of one individual have led to an unprecedented breach of confidentiality within the Supreme Court – one that will yield irreparable damage to the confidence of the American people and the rule of law itself. Politically motivated attacks directed at the Supreme Court, whether it be in the form of court packing or undermining judicial independence, must be opposed to the strongest degree possible. The future of our republic hangs in the balance.

Perhaps it's unnecessary to remind you that when I first knew Virginia Foxx -- and I've known her for 50 years -- she was pro-choice and fiercely pro-ERA, which may explain why she's so obtuse right now about the ending of a constitutional right for women.

I read her Newsletter every damned Friday, and it's always a recitation of Republican talking points and never reflects thoughtful phrasing. I suspect most of the content is written by aides and approved by her, but this one struck me exactly as it has you. I think she actually wrote it, which reveals how twisted is her usual thinking. So, it's appropriate to wonder WTF? And to wonder whether there is some small hangover from those days before she figured out how to get votes in these mountain counties.

BTW, as a follow-up, if it turns out that some right-winger leaked the text, you won't hear a thing from the Madam.

I had the exact same impression of her avoidance of the actual issue. However, I fear that even if her Democratic opponent focuses upon abortion and her stance, it will not resonate with the mountain voters.